Alright. I'm tired of snow, I'm tired of snow demons, I'm even pretty tired of snowed-in civilians. It's high time to introduce this weather system to the business end of my fist and head back down south where furless organisms are supposed to exist.

First thing's first: I somewhat grudgingly give my hypothermic laser dealy back to Justiciar. It was the best thing about this job, but you know, I just don't see melting huge blocks of ice in a matter of seconds coming up that much once I've left this place. Besides, I'm still made out of metal and can jump fifty feet in the air. Being able to melt ice in a hurry would be way more useful to the poor guy whose only current superpower is being an amputee. 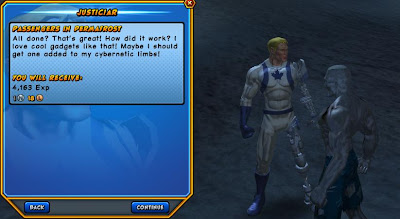 Maybe you should. What's next? 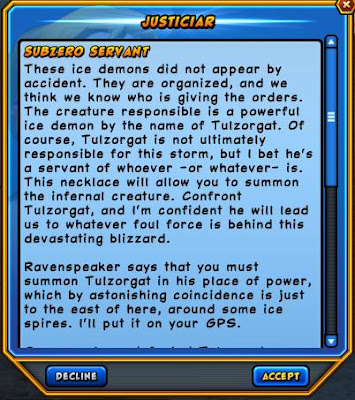 Alright, now we're getting down to business. Justiciar tells me that they have a suspect for the leader of these ice demon things and gives me a trinket necklace to summon the creature. His name is Tulzorgat, and he's an... ice demon.

Well, that's alright, I've beaten approximately eighty ice demons to death in the last hour, so that's not nearly as intimidating as it once would have been. He's apparently right outside the base, which is as logical a place as any for commanding a siege, so I head over there to summon him to our plane and beat the hell out of him.

Of course, he doesn't tell me HOW to summon a chieftain of ice demons, but I'm sure I can figure it out. I took that one anthropology class that one time, I own the first three seasons of Buffy The Vampire Slayer on DVD, and I'm really good at punching things, so this ought to be a snap.

Tulzorgat's Place-o'-Power is pretty hard to miss, as it seems to be a giant circle of stalagmites (those are the ones that come up from the ground, thank-you-geology!) in a small valley just up the hill from where all of those passengers were frozen in blocks of ice. Scattered about are bizarre translucent ghost-shrubs of some kind that look a little like dead bushes with fruit or possibly skulls in them. In the exact center is a fire pit in a smaller circle of stalagmites that appears to contain a blue campfire of burning skulls. 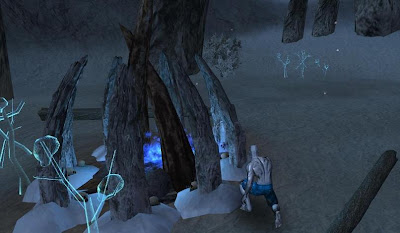 Alright, so, figuring out how to summon a demon. The blue fire seems fairly supernatural, so I try waving the necklace in the flames to see if that might awaken some sort of hidden quality in the necklace that might provide some clue how to oh nevermind there he is. 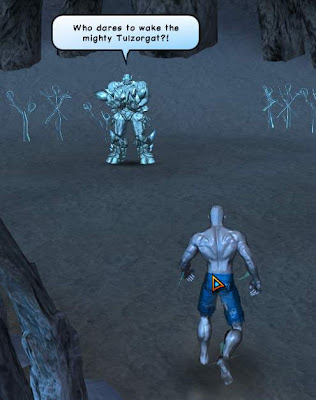 So, if you ever need to summon a demon with a necklace, huck it in the fireplace. Good to know.

He's much bigger than the other ice demons, and appears to actually be made out of ice, unlike his scaley blue subordinates. I find this a little troubling, as ice tends to be significantly harder than weird-buff-lizard-substance, but then, so is unidentified me-metal, and he ain't half as big as Black Talon, anyway. Alright, Tulzorgat, I hate your policies regarding the treatment of plane crash survivors. Let's do this.

He starts the fight by blowing out a cone of ice shards that leave a thick coating of frost, but otherwise don't do any real damage to my metal skin. I wade in close enough to take a swing at him, but doing so brings me within his approximately 200" reach and he clobbers me with a craggy chunk of ice the size of my torso that he apparently thinks counts as a fist. I'm surprised and disconcerted to realize that this actually hurts quite a bit, and if he lands another dozen or so of those I could actually get pretty well killed. It's kind of refreshing, actually.

Fortunately, he's too tall to set up an adequate defense for my ultimate technique... 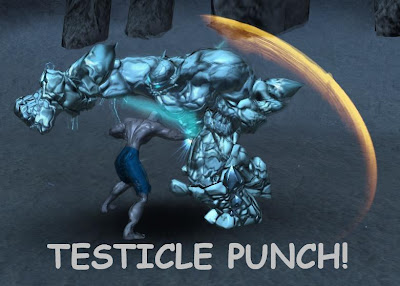 My ultimate technique is undefeatable, and his pelvis crumbles under my fists like a vital antarctic ice shelf under republican environmental policies. He falls to the ground and fades away, which I guess is a good thing.

So now... hrm. The storm hasn't let up. A glint catches my eye near the fire pit, and I notice a big icey evil-looking' treasure chest with a skull for a lock just sitting there for no discernible reason. Don't mind if I do. 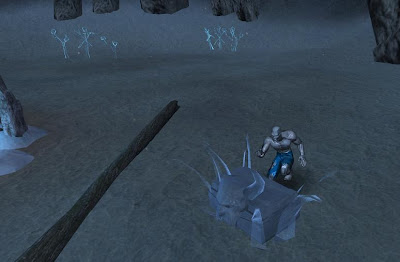 No gold or silver or snowflake-shaped diamonds, alas. All the chest contains is a funny-looking scroll with some scrawled writing on it that seems to glow faintly. I'm guessing this is more magic stuff. Unfortunately, I don't know magic from... um... sleight of hand. It looks like I'm going to have to talk to... ugh. Ravenspeaker. I climb a hill and look for his giant glowing projection of himself, visible to the naked eye for approximately twenty miles in any direction, and start hiking. 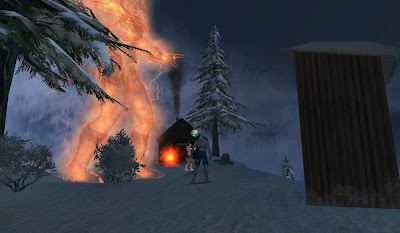 After several minutes of hiking up snowy slopes, I find him standing in his underwear between his cabin and the outhouse, straining to keep the giant glowing picture of himself from fading in the storm. Um. Hopefully, he's finished researching those demon marital aides I gave to Justiciar. 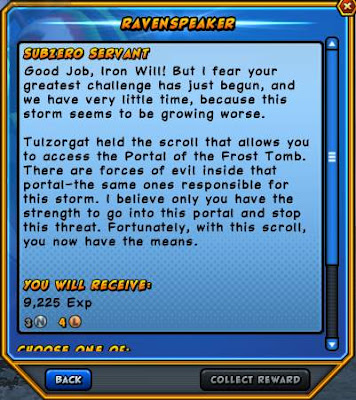 Ravenspeaker tells me that the big supernatural evil lord that I just broke into a million pieces was actually just the guy who had the scroll that would let us into the Portal Of The Frost Tomb, which seems like it should have a much better name. Through Tulzorgat's portal (even that sounds better) is whatever's actually responsible for the storm.

Now, I'm no wizard... yet... but it seems to me that opening a portal into a place filled with supernatural evil of the sort that can create an inland hurricane like the one we've been dealing with all day is a bad strategy. Wouldn't it be better to try to, like, SEAL the portal? Keep giant supernatural storms from coming out, maybe? This doesn't make a lick of sense.

Oh... okay. So the mystic scroll was a mystic scroll AND a memo from the desk of Dr. Destroyer. Not one to waste office supplies, that one. Apparently it's on his orders that someone named Rakshasa, who I'm pretty sure are Hindu demons or something (Anthropology!) has gone into the Portal of the Frost Tomb to wake up a demon god named Kigatilik. This leads me to think that the Portal of the Frost Tomb is even more poorly named, as the frost tomb is apparently more of a Frost Bed than anything, and also begs a number of questions.

First, I wonder why Tulzorgat had a letter to Rakshasa that he apparently needed to get into the portal in the first place, and how this Rakshasa got in without it. Second, why is it more important for me to beat up Rakshasa than to stop him from waking up the demon god? Is he not a real threat? If he's not a real threat, then why am I doing any of this? Which leads me to Third, if this demon god Kigatilik is anything like demon god Tulzorgat, why do I have to go into the portal and stop him from being awakened in the first place? I could just wait out here and trip him when he gets out and then punch him in the balls or something. And Fourth, if we have the scroll that opens the portal in the first place, why don't we just burn it up and trap Rakshasa AND Kigatilik in there where they can't hurt anybody?

There seem to be a number of problems with this strategy. But then, as I've admitted, I don't know magic from magic ... caaaaards?... (it's this game some friends of mine played in high school... nevermind) and presumably Ravenspeaker does, so maybe blundering into a frozen hell dimension and trying to quietly beat up a Hindu demon without waking an ice demon god really is better than just closing the door.

... I really wish I could get Chief Surhoff's input on this.

Okay, well, I've got everything I think I need. Scraps of jeans, a scroll, and a thermal vest that will supposedly keep me from freezing to death in a frozen hell dimension SO cold that the guy standing in his underwear on a mountaintop in the middle of a blizzard has told me, the guy standing barefoot in a shredded pair of jeans on a mountaintop in the middle of a blizzard, that I'd freeze to death without it. With these three things I'm going to head into this frozen hell dimension containing a demon god's bed called the Frost Tomb and beat up a Hindu demon quietly enough that we don't wake said demon god, although that's apparently not nearly as important as just getting the Hindu demon beat up, and we can always deal with the demon god later. I guess. What could possibly go wrong?

Have any more advice before I go, Ravenspeaker? 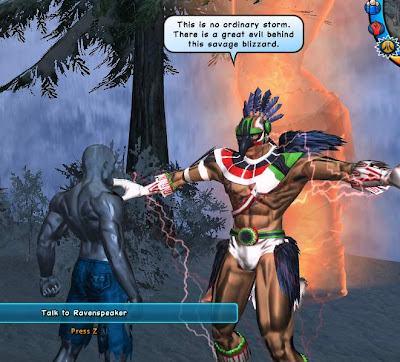 Apologies for the lack of updates. I've had a busy-ish month, bummed around a small chunk of Europe for a while, helped some friends move, spent about a week over various state lines, etcetera. Lots of interesting things going on. Which, as a lethargic shut in, I abhor. I'll pick this back up again soon.

Meanwhile, as further evidence of the amazing imagination engine which is the CO character creator, here's a completely-unrelated-to-Iron-Will screenshot from me and a friend playing about a week ago.

Pretty standard joke set up. A freeze-ray wielding cyborg frog monster and a blind nun with a lightsaber walk into an old west bar full of robot cowboys. Explosions ensue. I love this damn game. 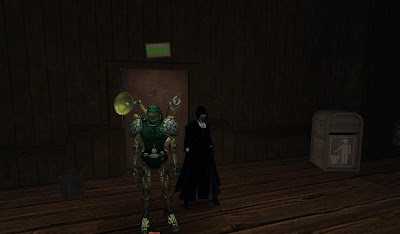