When last we left our hero Iron Will, he was about to strike out into the desert in search of the lost Greenskin officers Vanderbilt and Gertz. Our epic saga of slouching through the opening area of Champions Online continues!

Right, off to find the soldiers. I hop down from my perch on the wall and jog down the road, past the turrets, through the rock canyon, and take my first look at the great desert beyond. 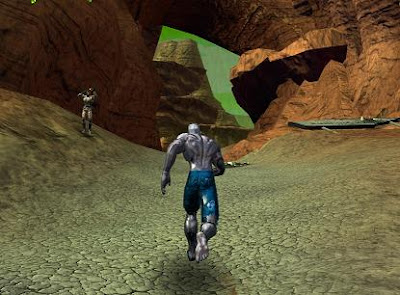 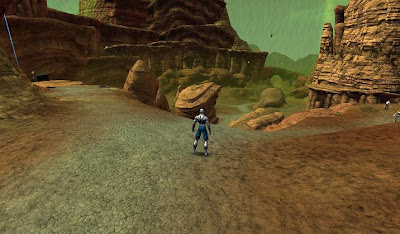 Vanderbilt and a few soldiers are crouched behind some parked jeeps just on the other side of the rocks, about a fifteen second drive from the Project Greenskin base. Well, that's one mission accomplished, I suppose. In fairness, they're not in direct view of the base, so I can understand why any operation led by Kaufman would have been unable to find them. I wander over and see if I can help.

Okay, good, at least he actually needs a hand, so Kaufman wasn't entiiiiirely mixed up. Plus he looks pissed off and has some pretty nice shades, and is at the very least out here in the mildly uncomfortable desert sun, so those are some points for him right away. Yeah, sure, I'm here to help. What do you want me to do? Go add more ice to the coolers you left on top of the mesa for no good reason, try to assemble a laptop blindfolded without any training, go in search of the jeep ten feet to your right, what's the emergency? 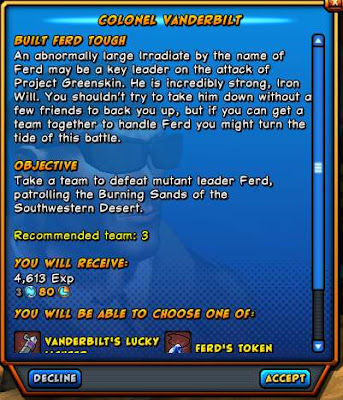 So you want me to dive right in and find a certain abnormally powerful mutant that might be a key leader in the attack? That's... that's actually a really good use for a superhero that you have on your side for a limited amount of time. Fair enough, I'll see what I can do. Anything else?

Ferd is the first "mini-boss" that the game recommends teaming up to defeat. Teaming up in Champions Online is pretty easy on an evening or during the weekend, as there are usually at least a few other heroes in the same situation as you who also need teammates for a specific mission. If you're like me and get most of your gaming done at 3am on a weeknight, though, it can be a bit of a pain. Not to worry, though, the game doesn't actually REQUIRE you to get a group together to complete the mission... the boss is just hard enough that it's probably a good idea. A well-built character can usually solo this one, although it's hairy. Later on you'll encounter missions with a recommended team count of five that are fairly impossible by yourself, but not yet. 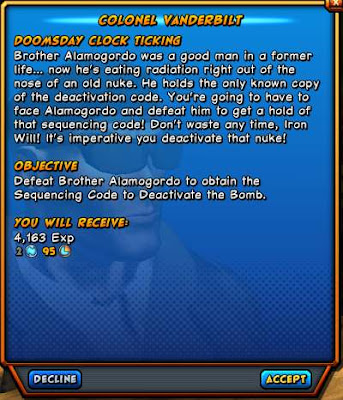 There's also apparently a particularly mean mutant out there who's sitting on an active nuclear weapon, and he'd like me to go and kill it, get the deactivation code from it, and deactivate the nuke, which, I would assume, is a high enough yield to blow us and the entire Project Greenskin base sky-high, and is apparently bleeding radiation like a drinking fountain, probably making it hazardous for any normal person to get within a hundred feet of it. That's just... that's a really, really good task to assign an invincible guy made out of metal. That makes perfect sense as a thing to do. I think I'm tearing up a little bit. Bless you, Vanderbilt. I was losing hope.

Right, first thing's first, I'm gunna shut this nuke down before we all die. I run past Vanderbilt's little camp, throw a mutant off the cliff (heh) and drop down to the canyon floor to find this nuke.

It's actually not too hard to spot, on account of the giant pool of glowing green goo it's leaking all over the place, and I've seen it before I even hit the ground. 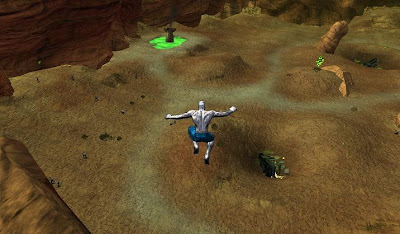 Apparently this Alamogordo didn't see fit to camouflage it in any way, but he might not be much of a thinker. Or he might be huge enough that he doesn't particularly worry about somebody coming along and killing him for his passcode. Hrm. Well, we'll see whether or not that was a reasonable assumption to make in a few seconds, I suppose. 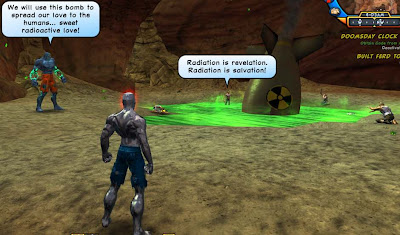 As I get closer to the pool, I notice a bunch of the garden-variety irradiates kneeling in the water worshiping the bomb and chanting "radiation is salvation" over and over again. I mostly ignore them. 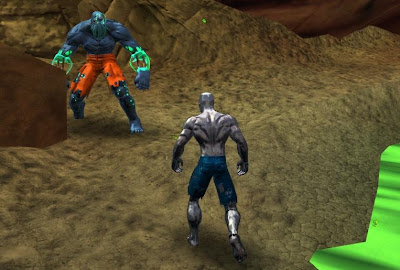 Standing just a few feet away from the radioactive pool is a mutant who looks different than any I've seen before and seems to be the one leading the little religious ceremony. About eight feet tall, he seems to have a cluster of tentacles for a mouth, blue skin, and several random patches of his body are transparent, both forearms and a side of his face, revealing two radius', two ulnas, and a chunk of brain. Strange fellow. Alamogordo, I presume?

We get right to it; I don't particularly want to hear anything else he might have to say on the subject of sweet radioactive love. A few of the irradiates in the water jump out to help, but a random Snake-Eyes Spiderman looking guy swings in and shoots them, drawing their attention to himself and letting me and ol' Alamogordo concentrate on some good ol' fashioned fisticuffs. Thanks, hero whose name I didn't catch! 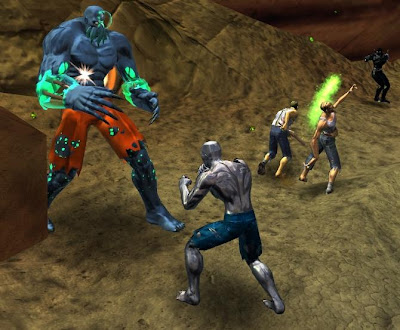 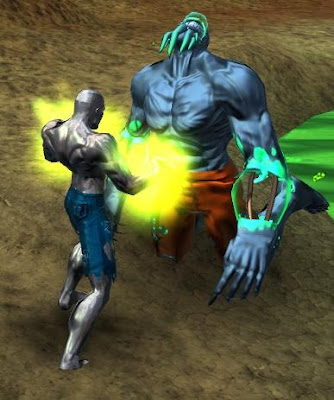 Alamogordo's big and he's strong, and he throws more painful radiation-balls than any of the other mutants so far, but he's still no match for Iron Will and his neutronium fists. The fact that I can see right where his brain is certainly doesn't hurt. He goes down without too much hassle, and I find the deactivation code in one of his pockets.

Other than the fact that I catch on fire with weird green radiation the second I set foot in the pool, it's a surprisingly simple matter to walk on over to the bomb and put in the code, shutting it down and preventing the complete destruction of the base. I can see why anybody without an invincible metal body would have had some trouble, though. Score one for the good guys. 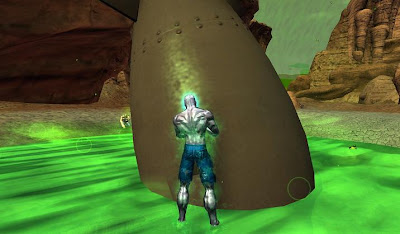 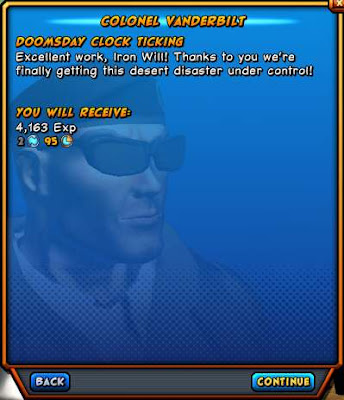 That done, I pop back up to Vanderbilt to report in. He gives me the fairly standard hey-thanks one liner, but I like it. He's a professional, we got other stuff needs doin'. I throw him a quick salute and head back out to find this Ferd guy. Hopefully he's about as tough as the late Alamogordo.

Up Next: Nope, significantly tougher.