On Original Character Concepts: The Cautionary Tale Of Sunspot

On the other hand, there are those rare characters that you think are a totally original concept but which are, entirely unbeknownst to you, actually a complete ripoff of something else. Next to "but it's an homage!" ignorance is probably the single most common excuse for blatant imitations of existing characters, and it seems like nobody ever believes the artist/writer/gamer in question, as the odds against somebody just coincidentally coming up with the exact same idea as an established creator are so very high.

Me, I think it's perfectly likely, at least to a point. As I mentioned a few days ago, there are at least three characters out there named Ironclad, all of whom are super strong, super durable guys coated in or made out of metal. As the name, originally a class of warship, quite self-evidently means "covered in iron" it's a really intuitive name for a character who's covered in metal and difficult to hurt, which in turn is a fairly basic concept that one could arrive at whether or not they were familiar with other characters that already used said concept. Therefore, if somebody came along and made a character named Ironclad who was super strong and made out of metal, I wouldn't automatically assume that they were copying the Ironclad who appears in Champions Online, for example. A super strong metallic character named Ironclad who was an alien gladiator? Still totally plausible, alien gladiatorial arena's a pretty common trope. A super strong metallic character named Ironclad who was an alien gladiator and got his abilities in an alien lab explosion, escaped, became a gladiator on an entirely different planet, escaped, and crash landed on Earth? Well, okay, that's suspicious, but you see what I mean.

Take me for example. I was making up a character for the Champions Online beta a good two years ago at this point and was sort of brainstorming backgrounds and ideas. It's pretty easy to make a character and just go, but I have this compulsive need to come up with at least a brief backstory or concept to go along with them, if for no other reason than I keep thinking I'm going to make comics someday and I might want to use them, or something.

I thought a solar-powered superhero was a neat idea. Granted, it's been done already; the most famous and arguably the first superhero ever gets his powers from the Earth's yellow sun. And farbeit for me to criticize anything about Superman, but super strength, speed, and invulnerability just didn't seem to be that thematically linked to the sun, to me. Heatvision did, but that was about it. I figured a solar-powered superhero would have more heat or energy related abilities, like the ability to get really hot and melt through things or breathe fire or make things glow or something. And, of course, fly, because any kind of energy projection could be used to propel oneself, and in comic book physics generating sufficient propulsion to beat gravity is only marginally harder than generating enough friction to create heat.

So I had this idea for a character who really only had one ability, to absorb and release sunlight and other ambient energy sources, but which could be used in a number of ways. He'd be jet black from head to foot, not because of a costume but because his skin absorbs all light that touches it, but would look otherwise normal. And instead of food, he'd subsist entirely on photosynthesis, absorbing sunlight all day long and getting some meager sustenance from starlight and indoor lighting at night.

Via some possibly nonexistent science that I don't know and am unwilling to research, he would get energy from the light and radiation of the sun, but would have heat left over as waste, like people suck all the nutrients out of food to turn it into poop. So for a set amount of time each day, he'd have to bleed off that excess junk energy, either by making his skin incredibly hot or by expelling it in a directed blast through his eyes or mouth. Again, via completely made-up science, this would in effect give him a force field (as energy attacks would be absorbed and incoming projectiles would simply vaporize within 0.1 inches of his ludicrously hot skin, see) and laser-esque eyebeams, as well as the occasional ability to breathe fire, melt through things, or fly by shooting jet blasts out behind him or some such. All of which would serve the approximate equivalent biological function of using the bathroom. Brilliant! Thought I.

I figured, as absorbing light takes the place of breathing as well, he'd spend a lot of time in space where there's nothing between him and the sunlight he's absorbing and where he'd be completely invisible if not between the viewer and a star or lighted object, and it would simply be assumed that that's where he was whenever I logged off. If he were to ever have comic adventures or a really in-depth backstory, he'd be doing zany intergalactic explorey things like the Silver Surfer, since he'd be a perfectly efficient engine with an unlimited fuel supply and no practical speed limit, and cosmic radiation and lasers and the like would only feed him. But, all this and he could still be decked by a good punch to the temple, provided he didn't have time to see it coming and raise his heat-shield, of course. 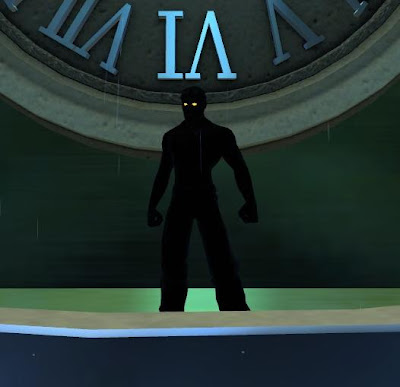 So, I thought this was a really good idea. I went into the character creator and made this, which was pretty much what I had in mind, making the last-minute decision to have his eyes glow, since they were the aperture he'd be shooting his eyebeams through and it would help to give him something at least approaching a face. His mouth would glow too, I figured, if I ever drew him, though there was no option for that in the character creator. But that would at least help to give him an expressive face, and probably make him quite a bit easier to draw in the first place.

Sure, he LOOKED a little evil, but I figured that could just be a part of his story too, that he was all persecuted at first by the general mutant-hating populace who assumed he was a villain just 'cuz of weird cultural prejudices against black costumes and glowing eyes. He wouldn't really have a secret identity because he couldn't ever turn it off, and he wouldn't need a day job or anything because all of his physical needs could be taken care of with eight hours of sunbathing a day. What a great concept, thought I.

The only question was what to name him. I cycled through the obvious ones but didn't like them: Solarman? Sunboy? Solar Shadow? Dark Sun? Darkstar?

I thought of the name Sunspot while I was looking up some of the half-understood science behind his abilities. I wanted it to have something to do with the science of Black Bodies, which not only physically describe him perfectly but seem to be exactly what I was thinking of when I came up with his powers. From Wikipedia: "A black body is an idealized physical body that absorbs all incident electromagnetic radiation. Because of this perfect absorptivity at all wavelengths, a black body is also the best possible emitter of thermal radiation." I mean, that's exactly what I was thinking of, innit?

Now, when I hear the term Sunspot, I think of this: Which is a perfect name for a jet-black solar-based superhero. Sunspot it is, I thought.

So, I name him, choose his powers (Fire and Flight, fits perfectly) and run around as him for maybe twenty minutes before somebody asks if I was the Sunspot from X-Men. Turns out, there's already a character named Sunspot. Not just that, but he absorbs all of his powers from the sun. Which makes him jet black. Except for his eyes and his mouth.

When I saw the pictures of him, I did remember a jet black character from way back when in an issue of X-Terminators (see him on the right?) that I read when I was about five, but he was just a super strong guy who flew around and was always surrounded by little black bubbles that didn't have anything obvious to do with the sun. Turns out it's the same character, except now they've given him solar blasts which make him pretty much the exact same concept as mine, the main difference being that he can turn back and forth into a regular person and has flying brick powers in addition to the solar blasts. Different, but alas, not really different enough to justify keeping mine around, so away he went.

BUT, I'm happy that a character of mine made it into mainstream comics. By, like, you know. Having been invented by somebody else twenty years before I came up with him.

Point is, give the benefit of the doubt to someone you think is copying something else who insists they don't know what you're talking about. AND. You should always Google your supposedly original concepts before spending too much time on them.
Posted by $ at 9.10.11 No comments: