In which our Platinum Protector, Iron Will, strikes back against the vile mutants who have overrun the southwest desert.

With my new orders and a strange diagram of an anti-radiation device of questionable functionality, I set out from the Project Greenskin headquarters on my long journey to, you know, fifty yards away. Half of the trip is by elevator. It's every bit as epic as it sounds. 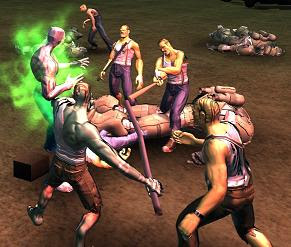 The instant I step out of the elevator on the ground floor I get mobbed by half a dozen Irradiates who attack me with baseball bats, lead pipes, and glowing green balls of radioactive fire that they can apparently pull out of thin air and throw.

This would be a pretty hairy situation if I was still made out of meat, but as things are, I'm mostly just annoyed that I'm surrounded by so many unattractive people. 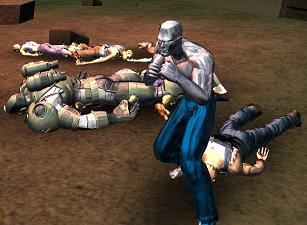 It takes somewhere between fifteen and twenty seconds to clock them all in their heads hard enough that they stop moving. Wiping the toxic blood off my knuckles with the jacket of a dead soldier, I'm struck for a moment by the thought that all of this may be desensitizing me somewhat.

I've got no real idea what order I ought to be completing mission objectives in or what the precise layout of the base is, so I pick a direction and start wandering through the base, figuring that between their inability to recognize me as a threat from more than ten feet away and their over-reliance on bludgeoning weapons that are softer than me, I ought to be able to handle any irradiates I may run into. After poking through some piles of dead soldiers, rubble, and the occasional burning jeep, I find my first Project Greenskin scientist, who has apparently angered a mob of five irradiates who are clustered around him hitting him with boards. 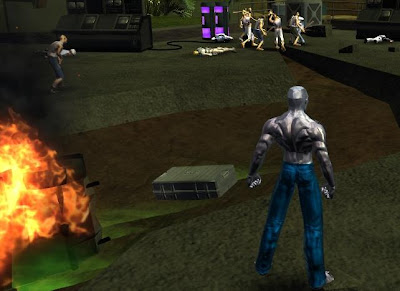 I'm unpleasantly reminded of those times I'd happen upon a troop of bigger guys roughing up one of the little nerdy guys in the hallways in high school. It riled me then, and it riles me now. And I react the same way I always have. 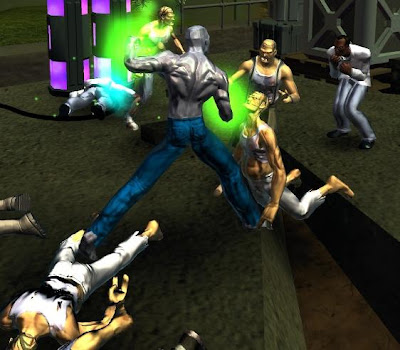 The operative difference being that in high school, I didn't have an implicit license to kill and fists in the double digits on Moh's Scale Of Hardness. Which, coincidentally, I only know about because a guy I saved from bullies helped me with my homework. It's a way of life.

Well there's an idea. So, Scientist Guy, I'm supposed to build this anti-radiation device and I have no idea how it even works. You think you could...?

Oh, he's already run away. Well, fair enough, I suppose. I'll catch up with him when I'm done out here. 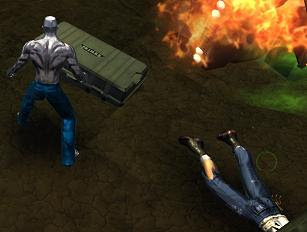 I also seem to be in the exact area that Mr. Tiller marked on my map as having a high concentration of the parts we'll need to build the thingamapoop. All it takes is a few sudden flurries of excessive violence to clear the mutants, and the crates are literally just sitting on the ground for the taking. Not all of them have the parts I need, but enough of them do that I manage to gather up everything I'll need within a minute or two, even with the added time to knock around the mutants. Alright, so that's one objective down. Since there's no single area where the missing scientists are presumed to be, I suppose I'll head down to the Grond statue and see about stealing some of those uranium rockets Kaufman seems to think it's a good idea to be collecting.

The only problem is that there's a good ten or so irradiates milling around directly between here and there. I could probably go aroooound... nah, actually, you know what? 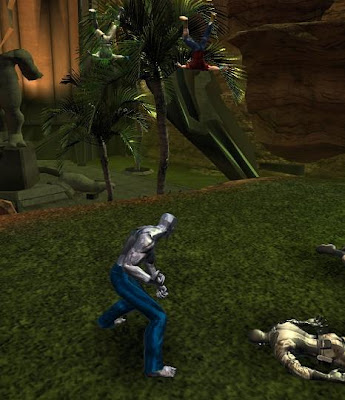 I wade on in, ignoring the sizzling green fire that they keep sticking to my chest and swinging my arms around pretty much randomly until I make it to the cluster of them near the cliff's edge, at which point it's time for a good ol' fashioned Roomsweeper.

Be sure to write. Jerks.

I lost count at twenty, but I think I've cleared just about every mutant on the upper level this side of the wall. Don't mean to toot my own horn, but I am really earning these new pants.

Okay, right, down to the Grond statue. Being invincible opens up a whole plethora of routes that I wouldn't have thought to take just a week before. I destroy a fair chunk of the sidewalk at the bottom of the cliff, but walk away completely unscathed and trot down the hill to where various mutants with bombs tied to their backs are scattering them about haphazardly around the statue. Not sure what their plan is, here, but I'm guessing those are the bombs Kaufman wants. 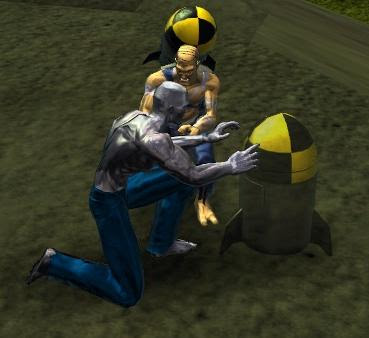 Aside from the fact that they insist on leaving time bombs wherever they go, these bomber mutants are about the most well-mannered irradiates I've met so far. I can walk right up to them and stare them in the eye, and they just sort of shrug and keep wandering around setting bombs up. They don't even try to stop me when I sit down right next to one and disassemble his bomb WHILE HE'S SETTING IT. How polite.

Yep, don't mind me, fellas, I'll just be undoing all your hard work right in front of your faces. I'll be out of your hair in a minute.

I must say, this is going very smoothly. I wonder if I might have a career in a bomb squad after this. Seems a practical application for invulnerability, and I seem to have a knack for successfully disarming bombs without any 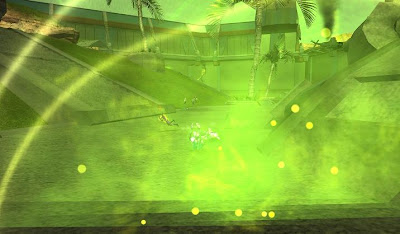 Oh, damn. So apparently these bombs are on a timer, too. Well, that has an effect on things. Guess I'll have to follow these guys around and jump on the bomb the second they put it down.

So much for my new pants. 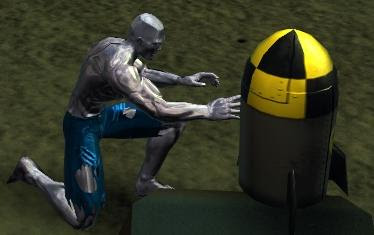 So I do that for a while and get blown up a few more times before I have enough bombs to satisfy Kaufman. This seems like the kind of mission I'd expect from Socrates, not a military professional. Oh well, that's taken care of, now all that's left is rounding up the remaining endangered scientists. I jog back up the stairs with half a dozen uranium cores jangling around in my pockets and look for some citizens in distress.

Do me a favor and start humming Trey Parker's "Montage". 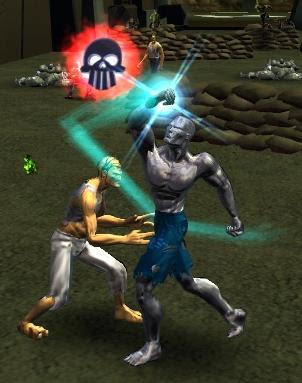 Okay, you can stop now, I only had the two.

I find and subsequently rescue two more scientists without incident before I run into something genuinely intimidating. 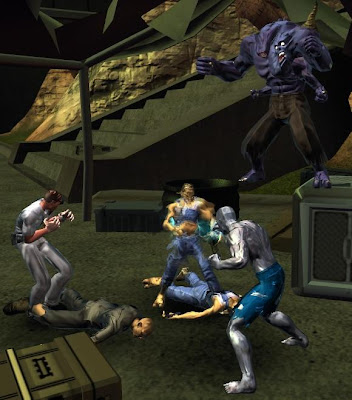 "Jesus Christ! What the hell is that thing?" you may find yourself asking. That, my friends, is some sort of weird headless purple goon with a face in it's left pectoral and two extra baby arms writhing out of it's stomach, of course. I find it beating up another scientist and, when it realizes it's been discovered, it jumps up onto a crate at about head height, leans way over the edge while balancing on one foot with shocking gripping strength, and screams agony and horror at me from it's malformed nipple-mouth.

Needless to say, I punch it in the chest-face for about five minutes longer than necessary while the scientist covers his face and cries behind me. You and me both, pal.

So apparently the mutants come in more flavors than just hillbilly and soldier. Good to know. I'm beginning to see why they requested some superpowered assistance with this whole situation. 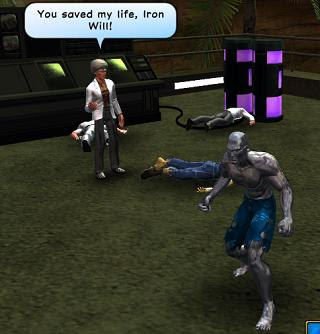 Anyway, I find one more scientist before my PDA tells me that I've saved all the missing scientists that Kaufman knew about. And I finally get the thank-you I've been waiting for this whole time.

Yes. Yes I did. Will you help me build this radiation thing?

So that's everything on my checklist. I head back to the elevator, this time opting not to fight my way back through an angry mutant army and simply jumping up to the helicopter pad. My legs must be pretty strong at this point. 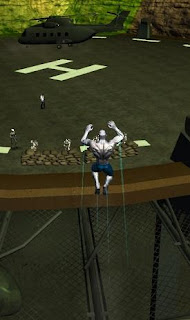 Run across the landing pad to the big metal door, ride the elevator up, stand under the shower heads for a few minutes, jog down the hallway and boom. Alright, I took care of that stuff for you, Kaufman. What should we do now? 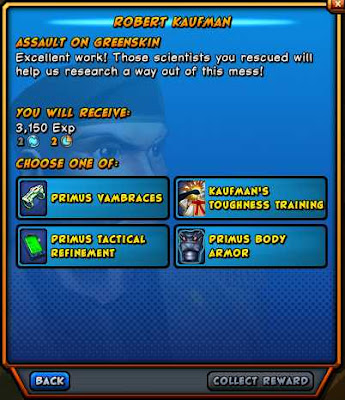 R... Research a way out of this mess?

I think Kaufman might overestimate the expediency of research or the practical applications of academic study. But um, yeah, okay, right on. Here's hoping they research us out of this as soon as possible.

By the way, what the heck did you need all these bombs for? 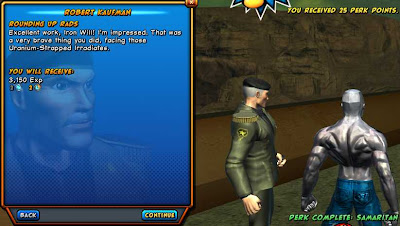 Somehow praise out of this guy just doesn't seem as heartwarming as it would be from, like, a police chief who went above and beyond the call of duty to defend his city from an alien invasion, for example, but I guess I'll take it in lieu of any sort of an explanation for what I was doing out there whatsoever.

From the way everyone's still standing around all poised and tense and the glowing green weather we still seem to be having, though, I don't think I'm quite done here yet.