In which our hero Iron Will finds himself completely out of his element.


With a little effort, followed by a whole lot of effort, I manage to shift enough of the rocks away from the vault door to wedge it open a bit and worm my way back out. SO, that's dealt with. The radioactive miasma hasn't started to clear from the sky yet, but presumably business will soon return to normal. Maybe. If there's something else needs doing, though, I figure these guys can probably figure it out themselves, I took care of the supervillains for them. Time to go help that guy without pants. I jog back into the base and head over to the helicopter, the pilot of which has apparently already been contacted and is all ready to take me to Project Steelhead in Canada. Shiny. Off we go. 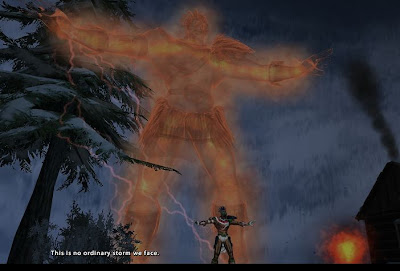 I must have fallen asleep at some point on the trip... it's a pretty long way from the southwestern desert to Canada via helicopter, I suppose. I wake up to Ravenspeaker's voice explaining the situation to me while the pilot gives the base a quick flyover. Ravenspeaker himself is standing on a hill under a thirty foot glowing projection of himself... must be trying out for the Champions... and telling me about the storm surrounding the base in a perfectly symmetrical cone of gale-force wind, which is apparently no ordinary storm in Canada. Good to know.

The speech continues. The storm is actually the work of ancient dark magics, part of a coordinated assault on the Force Station Steelhead base by a long-slumbering evil he calls the demon-god Kigatilik. A passenger jet has been brought down by the magic blizzard not far from here. Monstrous ice demons are roaming around the countryside and the dead are rising to attack the living. He would very much like my help.

Holy shit dude. This is entirely unlike hitting radioactive guys in the face. I briefly consider hiding under the seat until the helicopter takes off again, but it occurs to me that having an unnaturally focused storm directly overhead might make leaving by helicopter difficult. Also, a quick glance out the window reveals about a dozen men and women standing with assault rifles and shooting at misshapen figures along the ridge that I can only assume are some of the demons that Ravenspeaker was talking about. These guys don't have any special powers or damage resistances to speak of, but they're still here. Sighing, I climb down out of the helicopter and walk across the landing pad to a guy waving his arms at me. Don't know what help I'm going to be against demon gods and the risen dead, but I'm here to help, I suppose. 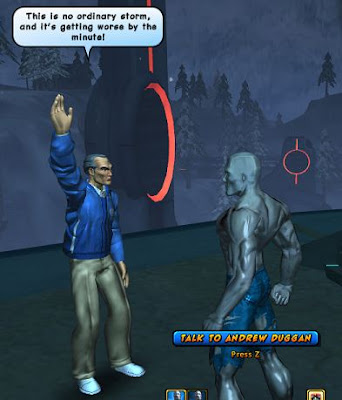 The man introduces himself as Andrew Duggan, and tells me that the storm is not ordinary. I actually already caught that from Ravenspeaker, but, um, thanks.

He doesn't have much else to tell me, just directs me down the stairs to talk to Justiciar, apparently the boss around these parts. Alright. Thanks for... um... the tip about the storm not being normal, man.

Down an exceedingly long flight of stairs and out across the snow (which doesn't seem to chill me even though I normally bundle up more to go to bed, so that's good) I find Justiciar standing in the middle of a circle of superheros and assorted freaks. This must be the place. Justiciar's a Canadian superhero, apparently, judging from his outfit, and his power appears to be that he's an amputee. ... Well um. That's pretty impressive, man. Although in fairness, he's not stuck in a cage or under a rock, so he's at worst the third least inspiring superhero I've met this week. I introduce myself and see if I can get any pointers for surviving under these crazy conditions. 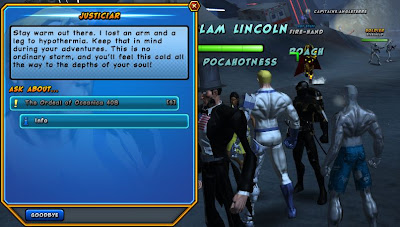 Apparently this is no ordinary storm.

I sigh. Okay. Thank you for this information. What can I do to help?