Sorry I haven't updated in a while. Oh, the holidays.

As I guessed from the overabundance of still-alive mutants inside his base and the neon-greenish weather we're still having, Kaufman's not done with me yet. He interrupts his busy schedule of barking orders at various superheroes to bark orders at me. 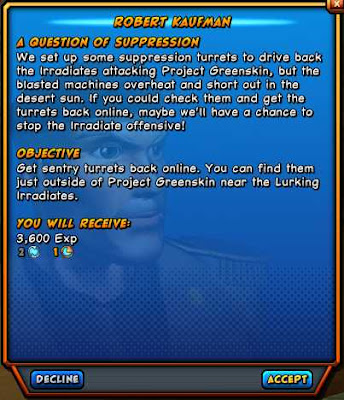 Apparently the good folks at Project Greenskin have set up an advanced technological defense against just such an eventuality as we're currently experiencing: a line of state-of-the-art automated turrets around the front of the base. Nifty-keen. There's only one small problem with this potentially invulnerable defense: the things overheat and short out if left out in the desert sun.

I'm going to let that sink in for a few seconds. We're sitting here in a base in the middle of the desert, which is, like most places I've been, under the sun. This is not a new state of affairs; the sun has been there since a good while before the base was established, and when they built it in the first place they built it in the middle of an already-existing desert.

It was at some point after all of this that they decided, hey, we should probably put out some turrets that will repel the waves of irradiated mutants we're here to keep under control, just as long as these turrets are at no point under the desert sun.

I involuntarily make a strange noise like bare brake pads in my throat somewhere, but I manage to keep a pretty straight face, if I do say so myself. Yes. Yes, sir. I'll go re-start the turrets that short out whenever the sun's out. This sounds like a marvelously constructive use of my time.

Back down the hallway, through the shower tent, down the elevator, and back out to the landing pad. Fortunately, since those personal trainers at the Powerhouse showed me how to use my super-strength to jump fairly ridiculous distances, I don't have to wade through all the irradiates between here and the wall's front door this time, I can just jump right over it. 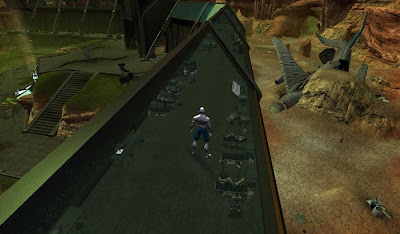 Hey, neat. I'm actually up on top of the glassed-in hallway on top of the wall where everybody's huddling for safety. I run right over Kaufman just to see the look on his face (completely unchanged) and then pop down to the desert on the other side of the wall. This seems like it should be a fairly momentous event as I'm no longer even remotely protected, but something about being able to vault the wall in a single leap makes it seem a little less so. Besides, there are a couple hundred freakish mutants running around inside the base anyway, so it's not like I'll be seeing anything I'm not used to out here. I make my way over a little hill and a crashed airplane to the first of the turrets and OH HOLY CRAP

The mutants out here are way more... mutated. I'm set upon by one of the ugly ones from inside and then three brightly colored four-armed ones covered in glowing veins with horns growing out of their heads. A least none of them have faces groaning at me from their chests. These guys seem to be made of denser stuff than the other ones, as my fists spatter into their faces more like a hammer into a rotten apple than a hammer into a rotten tomato, but I still don't appear to be in significant danger. A short bout of die-cast pugilism later and the turret is unattended. I flip the power switch and it turns back on, telescoping a big gun out of the ground and pointing it right at me. 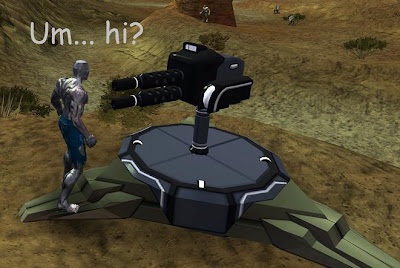 I freeze up for one terrifying moment as two gun barrels the size of my fists take aim directly at my throat. Automated turrets, he said. As in, unmanned. As in run by an artificial intelligence. 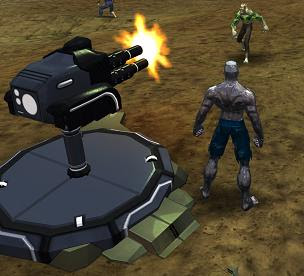 A few tense seconds go by while I weigh the pros and cons of trying to bend the barrels out of shape vs. running and diving behind the nearest rock, but then the turret apparently deems that I am not the right type of radioactive mutant and turns to gun down some poor four-armed sod who's walking by minding his own business.

Granted, I was probably about to run over and pound his face in anyway, but it's kinda weird to just stand by while a robotic gun does it. Oh well. I move on to the next cannon and the next one, and pretty soon all of them have been restarted, shot a few mutants, and then overheated and shut down again. Whatever. I head back inside.

Surprisingly, that appears to be the last task that Kaufman had for me. He basically tells me to go bother somebody else, some guys named Vanderbilt and Gertz who are out there in the desert somewhere. I guess he figures he has all the help he needs here with a giant wolfman and some kinda pale radioactive guy who he's giving out assignments to. Works for me. The mere fact that Vanderbilt and Gertz have survived out in the desert for a few days tells me that they're probably more competent than the guy who relies on scientists to research ways out of his problems and thought that overheating cannons were a great defense in the middle of the desert.

Speaking of things that aren't very good ideas, I have to get to work on my anti-radiation device before heading out. Mr. Tiller gives me the last component and basically just points me to a big table covered with deadly weapons and tells me to go nuts. Fortunately, the diagram he gave me is actually pretty well done, and I manage to put the thing together in less time than it took me to assemble my IKEA computer desk. ... But then, my computer desk is currently a pair of filing cabinets with a door on top of them specifically because I never could get the desk proper to stand up straight, but I'm pretty sure this weird machine of mysterious function that I'll be depending on to save me from deadly radiation is going to work just fine.

So, that taken care of (possibly) I guess there's nothing to do but pack up my little machine and strike out alone into the vast desert. I need me some John Williams' Binary Sunset, but the few remaining shattered pieces of my mp3 player are at this point melted to the inside of my pocket, and Mr. Tiller doesn't have any machines that can't kill someone, so I have to hum it.

A final trudge down the hallway, through the anti-radiation shower, and down the elevator, but from there I can stretch my legs and probably jump most of the trip. I spot something on the way over the wall that stops me dead in my tracks, though. 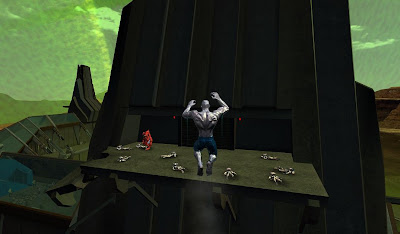 What the heck is THAT thing?

It's without a doubt the biggest irradiate I've seen, standing probably seven feet tall and with four fully formed and exceptionally beefy arms on him. Whatever it is, nine soldiers apparently couldn't take it down, and are scattered all over the platform around it. I should probably just keep on going... but you know what? That thing's a menace. Plus, Vanderbilt and Gertz went out into the desert looking for the irradiates' leaders, and I'm betting their leaders aren't going to be the smallest or weakest ones. Gotta start somewhere, and it might as well be with this big red guy. I get a better angle, line up the jump, and make my opinion of his conduct known. 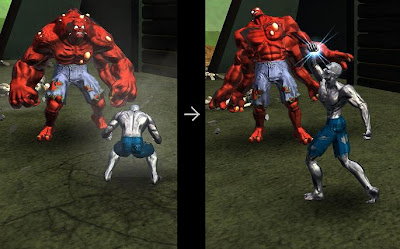 That doesn't seem to kill him at all. I suppose I should have expected that, but a good one-two has been enough to put down every irradiate I've met so far, so I'm a little disturbed by this discovery. He starts pounding at me with all four of his fists while I punch him in the side of the head as quickly as possible. We go back and forth a bit, and he fights me over to the edge, but I'm holding my own and despite the unexpected time investment, he hasn't actually managed to hurt me yet, so I'm feeling pretty good about this whole thing.

And then he smacks me right off the damn ledge. 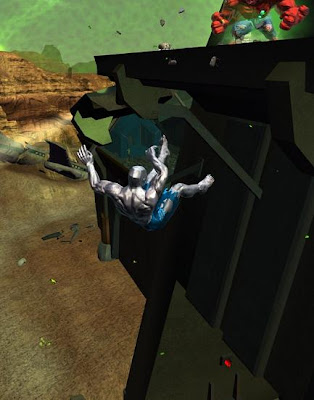 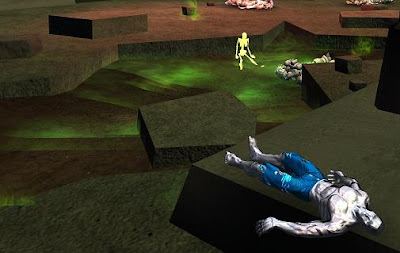 I'm pretty surprised. Nothing's actually managed to make me feel like I might be genuinely injured since I pulled myself out of the rubble back in Millennium City. The fall and the sudden stop of the landing, though, seems to have majorly jarred some of my internal kibbles and bits. Must avoid long falls in the future. Good to know.

Falling in Champions Online messes you up pretty bad. It doesn't really matter what kind of defenses your character has or how tough they are against combat damage, falling more than ten meters or so will always knock off a significant fraction of their total HP. It will never quite kill them, though; you can fly up to the very top of the sky and let your guy fall to the bottom of the deepest pit on the map, and he'll have exactly 1hp left. This helps prevent you from dying instantaneously from simple pilot error, but if you land anyplace with enemies around it's basically the same thing as falling to your death, as at that point a stiff breeze could kill your character.

Fortunately for Will, here, this ledge isn't actually all that high, so he's still sitting pretty at about half his total HP. Still, it was full a second ago. Pretty significant.

I haven't even pushed myself to my knees yet when the big red creep leaps off the platform and tries to crush me with his landing. Holy cow. This just got real. I'm feeling bruised and bloodied just like a fight in the old days, and the soundtrack in my head has switched over to Duel Of The Fates. Let's do this. 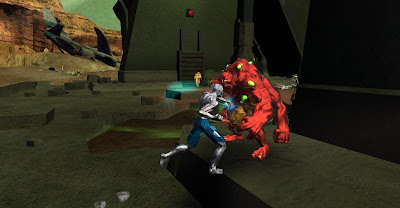 We pulverize each other for another few seconds, but he doesn't last much longer. The fall wasn't really gentle on him either, and his fists just aren't nearly as hard as my face, whereas mine are significantly harder than his. After all that scrapping up on the roof, he finally goes down without much of a fuss on the ground. 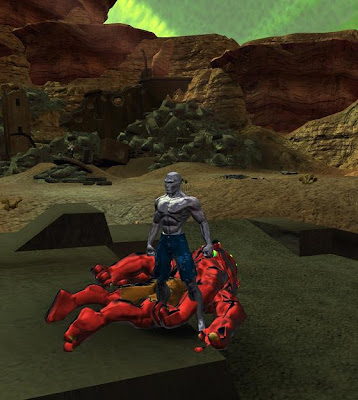 This is way more awesome if you're listening to the song.

The nine soldiers on the platform above finally avenged, I climb back up onto the top of the wall to survey the landscape. A vast irradiated desert stretches out before me, cut down the middle by a thin ribbon of dirt road that disappears into the rocks in the distance. I can only imagine what lies waiting for me out there, but somewhere out in all that sand and nuclear fire two brave men are waiting for me to come and save them. If I have to wade through a hundred miles of insane mutants, then that's what I'll do. Because I'm Iron Will, and I'm ready.

Back to binary sunset. 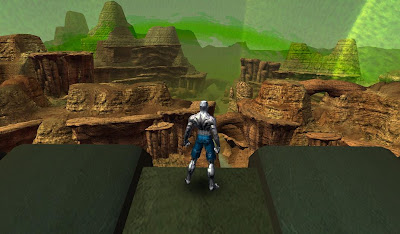