... of the tutorial of Champions Online.

Right, so, into the Champions Building to shut off some beacons. This shouldn't be too hard compared to the constant crunching of alien bugs and running errands for deranged superheroes.

The Champions Building itself is a little hard to miss. 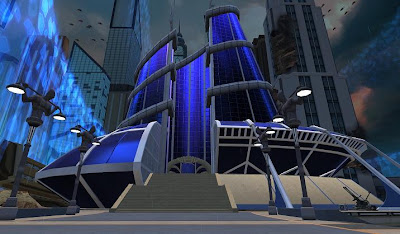 The Champions' bravery is apparently matched only by their humility. This should be interesting.

At the top of the stairs is some kinda rock garden fountain and the front door, which Dr. Silverback's codes open right up. There are no aliens around or anything, so I don't even have to look for a side entrance or a hidden hatch on the roof or nothin'. Smooth sailing so far.

The inside of the Champions HQ is a giant metallic temple place that sort of feels like a monument in D.C. colored in blue and orange with inadequate lighting and a ubiquitous humming sound. As soon as I open the door, I find that the Qularr have somehow made their way inside even though the door was sealed until half a second ago. Presumably, a building this sizable and ostentatious has multiple entrances and exits, though, so I suppose that makes sense. Fortunately, the Champions' security robots already seem to be fighting them off. About time the Champions did something right! I jog over to help, but a transmission from Doctor Silverback interrupts me. 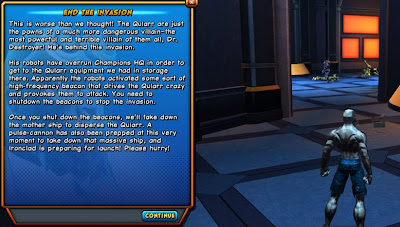 I have no radio that I'm aware of, so this is freaky as all hell. It's impossible to tell whether Doctor Silverback has hacked the PA system that this weird monument probably has or if he's somehow beaming his thoughts directly into my brain without my permission. It's helpful information, I suppose, but I shudder to think what could happen if Socrates ever gains access to this technology.

Okay, right, so the competent robots are of course in no way affiliated with the Champions and are instead apparently the minions of their arch nemesis, who hatched a brilliant plan to activate the doomsday devices the Champions were just sitting on for the last several decades and had no means of disabling remotely. These guys, man... whatever. So I'm up against alien bugs AND futuristic robots. I have no idea how to deactivate a robot, but hopefully their weapons can't bust through my new metal skin and I'll have some time to figure it out. 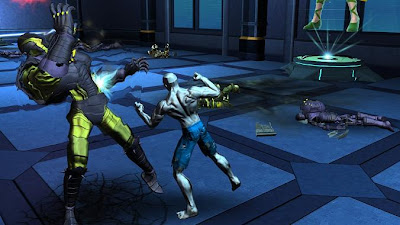 Oh, okay. Turns out, by punching them.

Whatever, I dive in, indiscriminately punching robots and insects. There's probably some strategy to be hatched here of attacking the winners once they've had it out amongst themselves or waiting until both sides are worn down and almost dead before wiping them all out or something, but I seem to do okay just rushing the nearest one and moving on to the next once it's down. I proceed through the Champions' creepy monument to themselves like this for several rooms before I come across this. 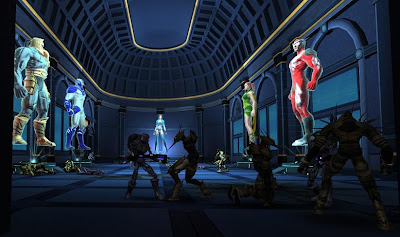 A massive hall dedicated entirely to housing thirty-foot holographic statues of the Champions themselves. In their own base. No, seriously.

When I have an Iron Will secret base (probably one room somewhere underground) know what it's not gunna have? A room full of statues of me. I can almost guarantee you that.

Anyway, I wade through this crowd too, busting exoskeletons and armor and generally contributing to the mess of machine parts and dead bugs that's been covering the floor here since before I arrived, and discover none other than Defender himself at the other end of the room, shooting blue lasers at a few of the robots. I lend a hand and together we finish off the last of them in the Hall of Humility. Least he's doing something. Once we're done with that, he runs back to the doorway and frantically waves me over. Um, okay. 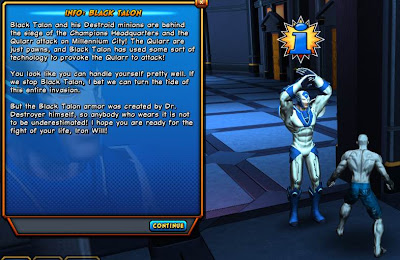 He tells me that it's actually not Dr. Destroyer, but a guy named Black Talon who's just wearing his armor. Fine by me, I just learned that Dr. Destroyer was a guy about thirty seconds ago.

So now me and Defender, leader of the Champions, are going to embark on an epic quest to destroy the inhuman minions and stop the vile machinations of the evil Black Talon (who he's heard of even if I haven't) and save the world. This promises to be a long and arduous journey, but I think it'll be rewarding. Where do we start, partner? 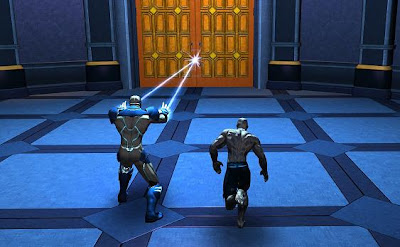 Oh. He's in the next room. Defender just blows up a pair of his own massive golden doors and there he is, a guy in a big honkin' black robot suit. 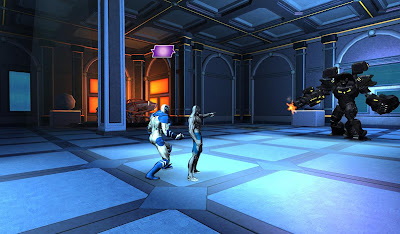 ... Or rather, I got this. The first thing Black Talon does is unleash a volley of little spinning missiles that pepper the entire area with ineffective little explosions. They mess up my already-shredded jeans tatters a bit more, but I barely even feel them. This is going to be easy, eh, Defender? 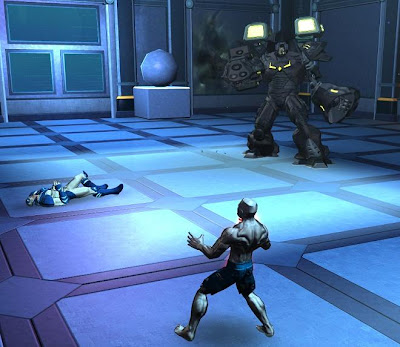 He's lying on his back writhing off to one side. He calls out to me in a strained voice, telling me that it's up to me, now. ... Champions. I swear. 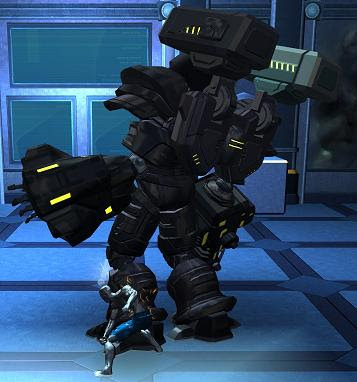 I kinda stand there stunned at how unimpressive the world's premier team of superheroes is (Ironclad excepted) and try to put into words how uncool it is to bring a newcomer along on an epic showdown and then go down in the first round. Black Talon keeps shooting me in the side of the head with a 20mm Gatling cannon, though, so I'm a bit distracted. Eventually I decide to go over there and shut him up. His suit is huge, so it takes significantly longer than any of the robots or Qularr did, but eventually I manage to batter through it's knee joint and the whole thing topples face-down onto the ground, trapping the pilot under the inoperative machine. Alright then.

Defender, apparently not actually that badly hurt, manages to get up now that the danger's over and congratulate me on singlehandedly defeating Black Talon, who I've still only ever heard of in the context of this one unimpressive fight. I kind of have my doubts as to whether he was actually even hurt in the first place or was just pulling a soccer player, but either way, we're on to the next stage of the mission. The beacons that Silverback told me about are apparently all located in this room, which is also full of various other trophies of questionable wisdom. We need to go around to all four corners of this massive self-esteem gallery and turn them off.

It's not that easy, though, as the room is also filled with Black Talon's robots, who apparently weren't actually being controlled by him at all, as they still put up a fight. I pick up some weird metallic panel thing that's probably another potential threat to the human race that the Champions have decided to keep around for aesthetics and smash them up. 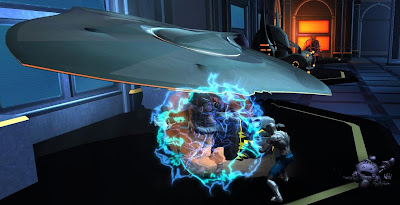 Then we switch off the beacons, and... that's it. We don't disassemble them, we don't smash them up, we just turn them off and Defender runs off towards the next one. Um... dude? What if someone comes in here and switches them, say, back on?

Well whatever, we're short on time, I guess. I'm sure they'll be taken care of the next time I come back here, right? ... Yeah, probably not.

That dealt with, Defender leads me into their control room, which contains a massive bat-computer looking thing and a holographic floating globe that's actually pretty nifty. 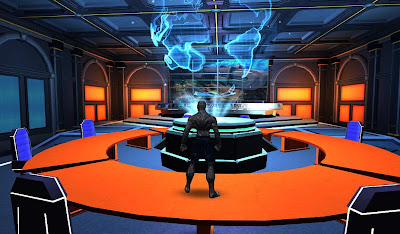 Defender directs me over to the computer and tells me to launch "the Ironclad defense". I like the sound of that, that's the one member of the Champions so far that I have any confidence in whatsoever. I hit the button that Defender points to and watch what happens on the view screens. 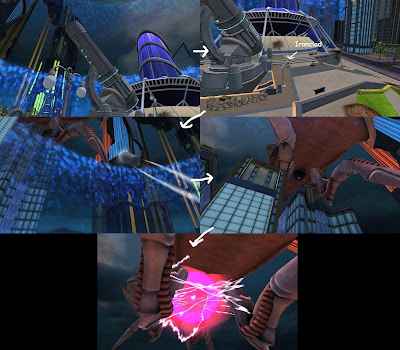 I'm um... I'm not sure quite what I'm seeing, here. It looks like Ironclad just climbed into one of those massive bullet things that were scattered around the cannon and then we shot him into the underside of the Qularr mothership where he... exploded?

Defender seems unconcerned, though, leading me out a side door that leads back outside. Is Ironclad okay? Does he have some kind of can-blow-up-multiple-times power? Could I get some kinda reassurance, here?

Outside, though, they've apparently set up a celebration in my honor. 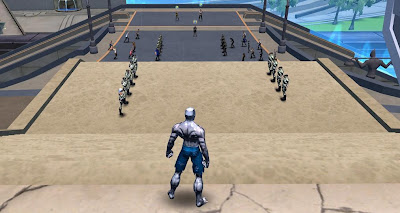 This is a pretty significant ego boost, I must admit, and I'd be having a pretty good time if I wasn't so worried about Ironclad. Has anybody heard from him? Can Doctor Silverback raise him on his creepy direct-to-brain radio thing? Can we send Sapphire up to look for him, make herself useful for a change? Can somebody give me some kind of Ironclad-related information?

I assume if they're this big into celebrating me for helping out, though, that they'd have some kind of massive memorial for Ironclad if he'd been killed. Still, that's my only assurance that he's okay, and I'm still pretty nervous. Everybody's at the celebration, Griswold and Foxbat and Silver Avenger Mayte Sanchez, soldiers and police saluting me and the mayor waiting to shake my hand. There's really only one guy I want to see, though. 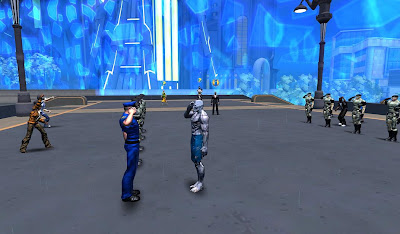 No, thank YOU, Chief Surhoff.


After talking with the mayor and getting a key to the city, those two superheroes in the back take me aside to talk business. The one who identifies herself as Witchcraft I recognize as the last member of the Champions from her giant holographic statue, the other appears to be some sort of male go-go dancer with a vaguely northwest tribal theme who goes by Ravenspeaker. They both ask for my help with other crises that have apparently sprung up on the same day as the Qularr invasion. Witchcraft needs my help in the southwest desert, where apparently an army of radioactive mutants has suddenly laid siege to a military base stationed there for the express purpose of studying and suppressing said radioactive mutants, while Ravenspeaker needs help suppressing a supernatural blizzard attack on an outpost in Canada. These both sound entirely out of my league, but I think I'd be more confident beating up mutants than trying to tough out dark magic in the frozen north. Plus Witchcraft, while a Champion, isn't a male stripper, so I'm gunna go with her.

A helicopter's waiting off to the side to take me to whichever place I want to go, and while I'm tempted to just have them drop me off at home and go get an actual superhero to help deal with the mutants, I figure I might as well see how far this superpower thing can take me and tell them to fly me to the desert, waving goodbye out the window at the small army of fans I've somehow made in the last two hours.

This is a weird day.