In which our hero Iron Will is made to feel somewhat uncomfortable!

As soon as I make sure that the pilot is being seen to by a few of the soldiers in the base, I head back over to Justiciar's post, which consists of a random patch of snow near the center of the base just out of earshot of the assorted rescue workers that he's presumably giving orders to. I'm having some trouble figuring out his placement, but I'm fairly certain that they just put him here to make him feel important. My working theory is that, as one of Canada's premier superheroes (which, if Ravenspeaker is any indication, isn't a terribly competitive title) he came out here as soon as he heard that there was a problem to offer his assistance to the Force Station Steelhead personnel. Once they discovered that his main superpower was being an amputee, though, they realized that they couldn't really use him, but felt bad about saying so. "Um... we need you... to... go stand over there and talk with the real- er, the LESS EXPERIENCED superheroes as they come in. Only you can do this, mighty Justiciar!" 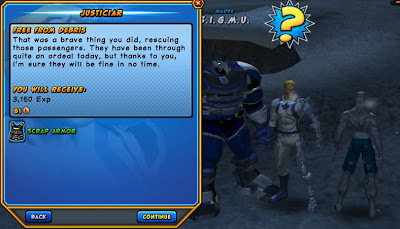 I report back on my success with the moving of debris and the punching of demons, and for the second time in as many days I'm told by a grown man who is not my father that I've done a very brave thing. Er... thanks. What other very brave things need doing? 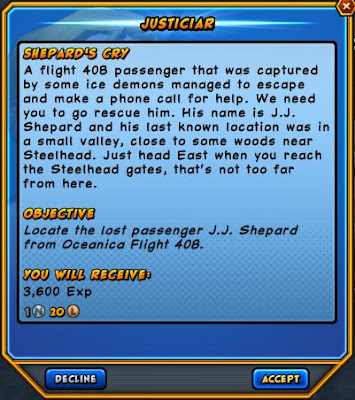 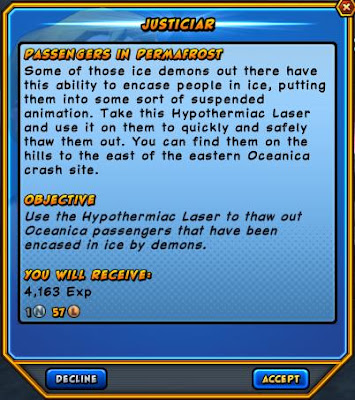 Great balls of steel! Some of these Ice Demons have ice powers! According to Justiciar, they've been freezing people solid in some sort of strange magical way that doesn't crush all their organs or cause their brains to die. I never knew that freeze rays had a stun setting, but I guess when you're dealing with ancient elemental magic, anything makes sense. He gives me a laser (SCORE!) that can melt the ice so that I can free the frozen passengers. Apparently there's also a passenger who managed to escape and call for help from somewhere, and he could probably use some rescuin' too. I can't think of a way to involve my new laser in that one just yet, but I'll figure something out.

There's something else, too. 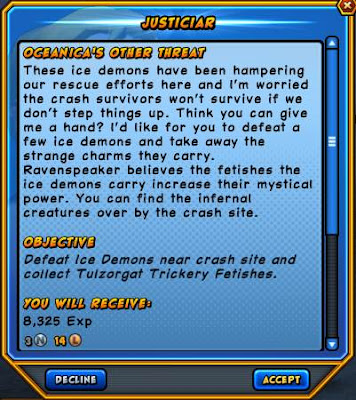 He wants me to collect Tulzorgat Trickery Fetishes, whatever those are. I'm a little turned off by this. Most of my experience with Fetishes comes from the internet, and it's been almost universally distasteful. I don't even want to know what kind of fetishes spikey ice demons who enjoy helping people freeze to death would be into.

But then, he describes them as "charms" which might mean they're something else entirely. I remember fetishes were mentioned as objects in the syllabus of a course I was going to take called Magic And Witchcraft, but I dropped it on the second day when I realized it was an Anthropology course and that I wasn't actually going to learn to cast any spells. So really, I have no idea what I'm up against, here. Hoping that it's nothing I can catch any diseases from, I agree to go take away some of the ice demon's fetishes, wishing not for the first time that I had some sort of waterproof gloves to go with my jean scraps. 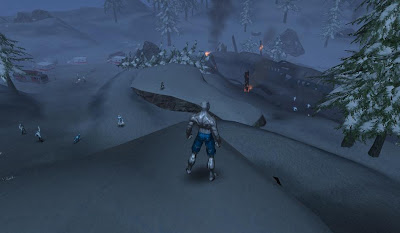 The other half of the plane is way on the other side of the base, facedown in a valley. Damn but these passengers are durable. I get to work hittin' ugly things in the face.

I'm unpleasantly surprised to find that on this side of the mountain, not only are there big spikey demons and bigger spikey demons, but they've also brought along with them some sort of weird reanimated human corpses. 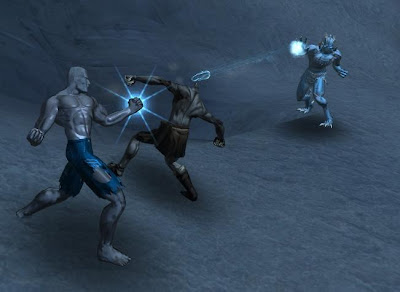 It's okay, it's okay, I'm a superhero now. Zombies aren't a problem for me. Just gotta shoot 'em in the head. ... This one does not have a head. This is problematic.

Turns out, just punching them until all their bones are shattered puts them down just as well. They actually seem to be significantly softer and less dangerous than their demon counterparts, but there's just something unsettling about fighting a dead guy without a head.

I really, really need to invest in some gloves.

Once I'm done mashing the zombie into a foul-smelling paste and take out (albeit less completely) his demon friend, I notice that he drops some weird totem-pole lookin' thing.

Just as I feared. Sex toy.

I pocket the thing, hoping that the crusted zombie paste will block any dried demon germs, and wondering why Ravenspeaker wants them and whether or not this is in any way connected to his never wearing pants, and keep looking around the crash site. It doesn't take too long to find some of the frozen survivors that Justiciar mentioned. 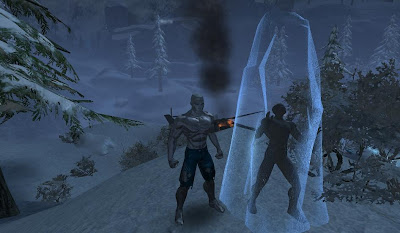 It's mildly unsettling. I bust out my laser. Hope this works! 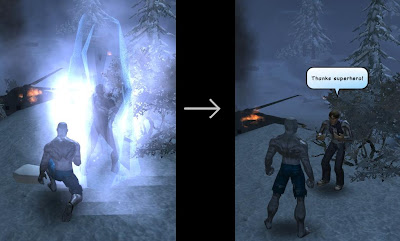 Ah-HA! Complete success. No, thank YOU, citizen, for giving me an excuse to use a laser.

It takes a little while to recharge, but it still might be the coolest thing I've ever carried around. Beats the hell out of my pocketful of demonic marital aids, anyway. I'll just pop around to see if there are any more passengers that need thawing out before searching for this Shepard guy... 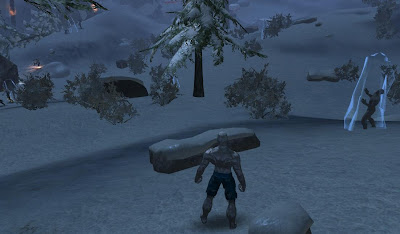 Up next: More adventures with the most durable passengers ever!
Posted by $ at 15.3.11