Not Lost, we just don't know where we are.

Apologies to the... probably two?... of you who expect updates on this blog regularly. Some random service pack issue seems to have made my computer completely unable to process image files or create thumbnails of anything, which made screenshots understandably difficult to supply. I've found a little workaround for the issue, and I'm up and running again. Sort of. Kind of.

Many, many applications of the thermal laser later, and all the passengers stuck in blocks of ice have finally been freed. Righto, now that that's dealt with, it's off to find this Shepard guy. Fortunately, he's not very far away at all, cleverly hiding behind a rock from the ice demons I've just finished pummeling. He looks intact enough, but, as I really should have expected, there's a catch.

Apparently somewhere between all the rescuing of passengers and the rescuing of passengers, I forgot to rescue some passengers. Drat. I head off to find some non-frozen hostages of the demons, wondering just how many people were on that plane. At this point, I'm fairly certain that the flight was completely booked and that absolutely nobody died in the crash that tore the plane in half and scattered the pieces a mile or two apart.

I find the first one just over a ridge from where all the frozen passengers were, a tough-looking older bald man named "John". He seems vaguely familiar, but I have no idea where I could have seen him before. 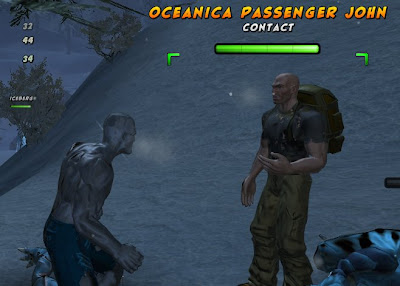 I beat up the two Ice Demons that were preventing him from leaving and move on. Three more passengers to go. The next one's two hills over, past where I was just making the rounds thawing out frozen passengers. His name's "Finn", and he gives me a gruff man-thanks after I deal with his demon friends. That's cool, I can respect that. He looks oddly familiar too, though. Eh, whatever. Moving on. 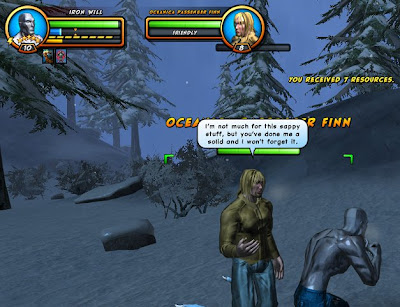 The third passenger is named Furley, and he's out right in the middle of the plains being menaced by a full team of five ice demons, and wearing nothing but a T-shirt and shorts. He's a hefty fellow, which I suppose helps a little bit, but there's still some severe hypothermia in his immediate future if I can't get these guys away from him. Fortunately, I can, and he tells me that it was "totally awesome". I like this guy. Can't shake the feeling that I've met him somewhere before, though. 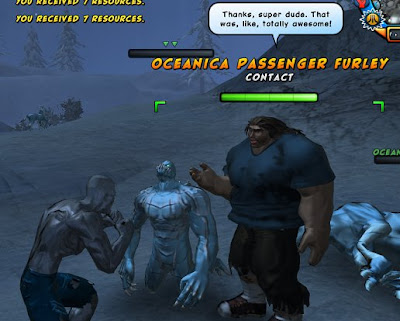 OH I GET IT! Well played, Champions Online.

Seriously, the game's full of stuff like this. I kinda love it.

The last passenger's name is Cathy, and she's right up the hill leading back to Force Station Steelhead. She's only got two Ice Demons bothering her, which at this point means about a one second fight if I use my left hand and my right hand at the same time. I think I'm getting pretty good at this superheroing thing. 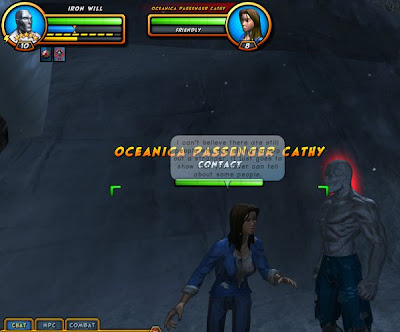 The last of the passengers from the front end of the airliner saved, I head back to base to see what else Justiciar wants me to deal with while I'm in town. This whole supernatural evil from before the reckoning of mankind thing has wound up being pretty manageable, and I'm starting to think that as long as there's a straightforward enemy that I can walk up and punch, I can probably just go ahead and solve most of Canada's problems while I'm here.

I get flagged down by a soldier as I strut back into base, though. What seems to be the problem, officer? 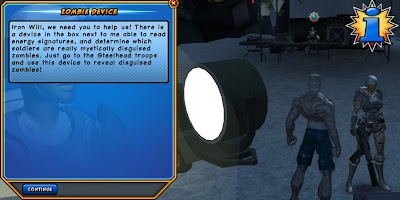