Out On The Town

When last we left our hero Iron Will, he had found his way back to the miraculously restored metropolis of Millennium City, and was being tasked by the mighty Defender with such vital peacekeeping duties as bothering people in the park.

Well, it looks like I'm probably going to be spending a fair amount of time in this city if I'm going to commit to the whole superhero thing. I figure I might as well; no way are they going to let me onto the football team back in school if I'm eight hundred pounds and made out of metal. It just wouldn't be safe for the other players. And really, Daniel in Geology will probably get a much better grade without me as a lab partner anyway.

So, if this city's going to be my new stomping grounds, I suppose I oughtta look around a bit. I'm sure that the possibly shady characters in the park can wait for a couple hours to get harassed. Commence the walking tour!

Now, I don't trust her as far as I could throw her (and it must be kept in mind for this expression that she's firmly planted in the ground) but I'm hoping that the nearest Socrates terminal has at least a few utilitarian purposes and might have a map of the city or something, so I head back over there, which isn't very far from Defender's little security kiosk. I kind of bow my head and avoid looking over there, hoping that he'll simply mistake me for some other metal-skinned guy. Most places this would not work, but in this town...

I'm both pleasantly surprised and more than a little suspicious when Socrates chimes in that she'd be happy to give me a guided tour. 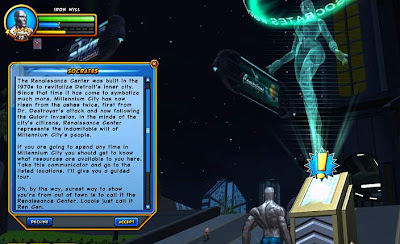 I'm also a little curious as to how she plans to do this, since her projector is built into the ground, but sure, what the hell. She marks spots on my map to check out, and I wander around the Ren Cen, as she insists residents call it, for a half an hour taking in the sights.

Among them are an UNTIL terminal, which apparently stands for United Nations Tribunal on International Law, and which seems to basically be a fancy needlessly holographic email station. I guess as phone booths are to cell phones, UNTIL terminals are to... modern cell phones. Well, since I don't have one, I suppose it's good to know it's here.

There's the Millennium City Bank And Trust, which boasts safety deposit boxes individually shielded against radiation and arcane energies, where they've already set aside a box for me free of charge! That's actually really cool of them; I'm starting to feel welcome already. It'll be pretty handy to have a spot to leave stuff I don't want to carry around with me. Granted, so far I don't have anything but this weird communicator Socrates is talking to me through which I don't actually remember getting (SUSPICIOUS!) and a pair of torn up jean shorts. Speaking of which, there's also a line of tailors who have set up shop under a big half-circular pavilion right by the center of the... center. They appear to cater to superheroes specifically, judging by the clothing articles they have on display like ninja hoods, spandex bodysuits, and random pieces of robotic looking armor. That's convenient, I suppose, although one wonders why they don't set up clothing stores like everybody else. They seem to be doing good business, though, judging by the crowd.

There's an auction house not far away, where I can apparently buy and sell things that other non-retailers put up to bid. That's kinda cool... I don't have any money stashed away, but I could always sell random stuff that I come across on my various jobs. I bet some collectors would pay a lot for a rare Tulzorgat Fetish, marital aid of the snow demon horde recently expelled from the frozen north. That's gotta be pretty rare. I should have held on to one of those. Oh well, next time.

And last but not least, the Super Jet, which is what I just flew in on. Apparently it's a dedicated jet that's only for dispatching superheroes to crisis zones around the world, maintained by donations from various charitable parties. Now THAT will be handy. Plus, I guess the fact that I rode it here means that I'm already a superhero in the eyes of whatever nonprofit maintains and flies it. Score!

Walking back down from the Super Jet's landing platform, though, I'm distracted by a giant amphitheater with a sign reading Hero Games. 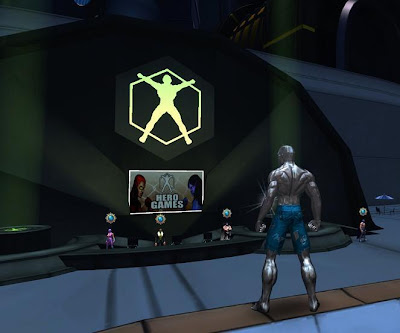 That sounds familiar... didn't someone in Canada think I should join up for those? I wander over and see what they're about.

According to the promoter, it's more or less what I figured, a sort of UFC for metahumans. Well, I figure nothing's been able to hurt me much so far, and I do kind of miss individual sports where I didn't automatically have an overwhelming advantage... sure, I'll try one. Let's see how this goes.

There are two types of Hero Games matches available at a low level, Cage Match and Zombie Apocalypse. For now, we'll be going with Cage Match. Cage Matches are fairly straightforward. Players are divided into two teams, Red and Blue, which you'd think would be auto-balanced but are usually at least somewhat lopsided, and then thrown into a ring with the rather simple goal of assisting everyone on your team and pummeling everybody on the other team. Scoring is based on kills for the entire team, and the first side to 15 wins. This can be done either by beating each of five opposing players three times, or picking on the the little one and killing him fifteen times, up to you.

Now, the problem with cage matches is that, for whatever reason, they seem to be the primary hangout of munchkins. For what seems to be the vast majority of players in cage matches (hereafter referred to as "virgins" out of pure spite), character concept or theme is de-emphasized or ignored outright in favor of the most mathematically effective hodgepodge of powers for preventing the opponent from moving. Many have spent a significant amount of time memorizing the ins and outs of the game mechanics and copying other people's characters off of forums to tweak for maximum lockdown effectiveness. You'll hear a lot of words like "builds", "spike damage", "roots", and "holds", and will likely spend the majority of each match either like this: 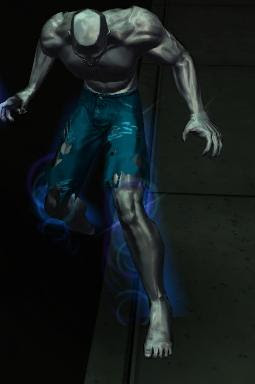 The average build for a non-you cage match gamer will be a pile of unrelated defenses, at least two ways to immobilize you, a ranged attack they can charge while you're immobilized that will do a lot of damage really quickly without exposing them to the risk of being hit themselves, and Teleport so they can flee if it looks like you might have a chance to do something. Do not bother trying to inform a Virgin that this is both lame, uncreative, and makes the fight - the winning or losing of which you didn't actually care about because career stats aren't even tallied - no fun whatsoever for half of the people involved. They will not understand. 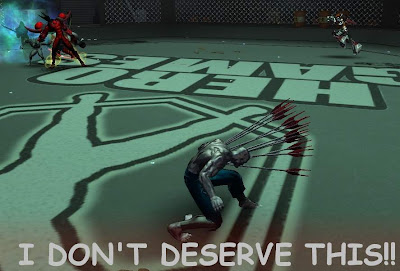 And that's how it goes. 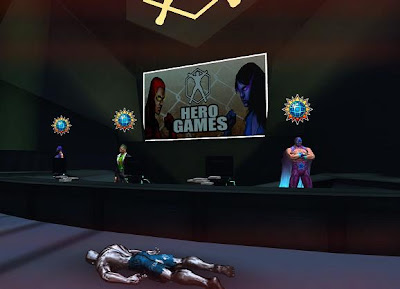 H... huh? Wha? Last thing I remember my feet were frozen to the ground and some cyborg was shooting me with arrows.

Alright, so that was humiliating. These guys are genuine professional prize fighters, it might have been silly to think that I could just walk in off the street and compete. I just don't have the training, the fans, the look...

I head back to the tailor in the middle of the center. To my pleasant surprise, they don't ask for money, as apparently superheroic reputation doubles for currency around here. Awesome. So, I'll just need that... and this... and do you have these in my size...? 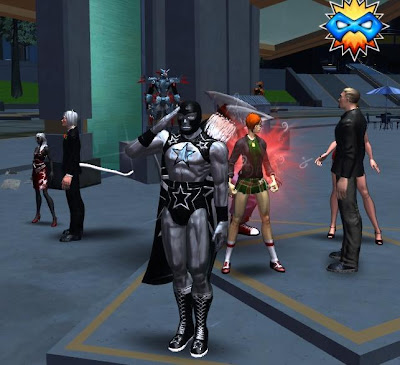 I am READY. If there's one thing that Pro Wrestling taught me, it's that a star theme at least doubles your chances of victory! ... Besides, the tailor didn't have any creepy green lizard man masks.

Iron Will will no longer be competing in cage matches. Ladies and gentlemen, please welcome the newcomer EL FIERRO to the ring! 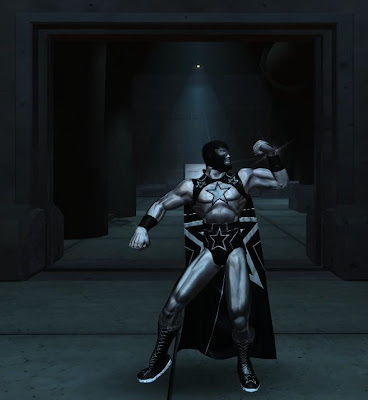 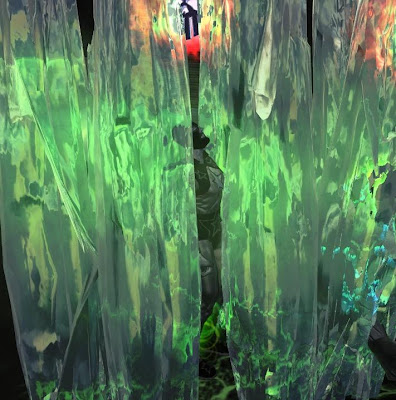 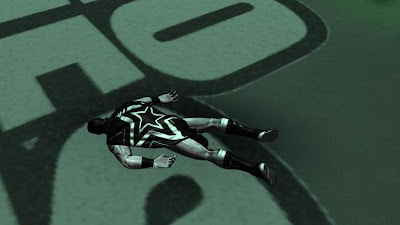 Up Next: Out On The Town... THE THRILLING SECOND CHAPTER!!!