When last we left our hero, he had been thoroughly Held and beaten in the famous Hero Games Cage Match. After such a crushing defeat, where will our ferrous fighter go next?


Alright, so, ow. Maybe cage matches aren't really my thing. Excuse me, maybe they aren't really El Fierro's thing. I feel kind of bad for him; it must be embarrassing to get beaten that badly. Not that I'd know. But there's still one more option at the Hero Games: the mysteriously titled "Zombie Apocalypse". With a fair amount of hesitation, I cross my fingers and sign up for that one.


The Zombie Apocalypse Hero Game used to be one of my favorite parts of the game before they patched it to kill everyone right away. It is my enduring hope that they'll someday repair it.

In Zombie Apocalypse, everybody is put into a cabin full of civilian survivors with the goal of going outside and defending them from an incoming zombie horde, except for one player chosen at random who starts out as a zombie. There is no difference mechanically between your normal character and your character as a zombie, except you'll be given one of about half a dozen random zombie "costumes" to distinguish yourself from the living players. This, for example, is how Iron Will looked when he started on the zombie side. 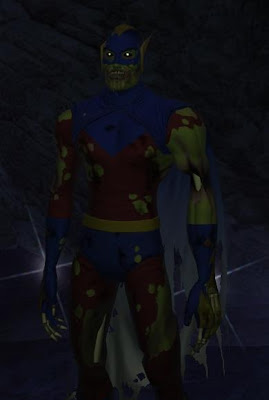 He certainly looks like a zombie superhero, doesn't look much like a zombie Iron Will. Understandable, as there are so many options available in the costume creator that trying to make some kinda automatic "zombification" costume change for each individual character would probably look ridiculous more often than cool. Anyway, as a zombie, your goal is pretty simple: make your way to the cabin and try to kill all of the other players. It seems fairly difficult at first, as you're outnumbered at the beginning except for hordes of simplistic zombie NPCs that you fairly obviously stand out from. But, each survivor that you kill revives as another zombie hero on your side. The very beginning is the toughest part as a zombie, but it's easier to take one out when there're two of you, and easier with three. Eventually, the balance shifts entirely, unless the survivors really have their act together and manage to take you out over and over again before you can get even one of them. If the survivors last for a full fifteen minutes (or possibly twenty... I don't recall exactly) and stay within a certain radius of the cabin, they win. It happens (or used to happen) from time to time, and since Iron Will is built almost entire for defense and doesn't have any terribly strong attacks and no range to speak of, I expected it might go that way. So I was quite pleasantly surprised and a little perplexed when it took me less than three minutes to wipe out the entire survivor team. 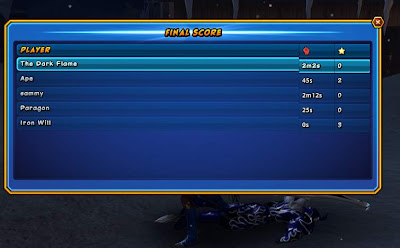 Now, I'd like to take credit for this, but there were a number of factors at work that I had nothing to do with. Most notably, some of the survivors I squared off with were already half dead and on fire from something I didn't see at all. I was on fire too, but that was because one of the players hit me with a fireball; Iron Will has no fire powers to speak of, so why the survivors were on fire too is beyond me. One I beat up until he ran away too fast for me to chase, and then dropped dead from the flames after about fifty feet, and another I knocked across the clearing and simply didn't see again, as they were presumably eaten by the supposedly-weak zombie NPCs while I wasn't looking. Really, there was only one other player that I felt I actually beat, and the rest probably would have fallen to the zombie NPCs whether I'd been there or not. 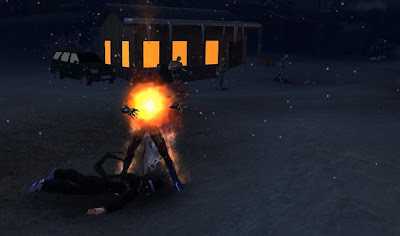 Now, I hadn't played the zombie apocalypse pvp for a few months, and this was not how it used to go. The zombies I remembered were more of a distraction than a threat, basically just there to keep players from getting automatic out-of-combat healing and occasionally to hold them or interrupt charge attacks if they were being too blatantly ignored. These zombies completely devoured the players, and somehow set them on fire. Very curious. The second time around, I'm one of the survivors. You start in a cozy little woodland cabin surrounded by terrified survivors and a few other superheroes that, along with you, are all that stand between them and a gruesome death. In this case, a cyborg woman and some kinda demon guy. We headed outside to meet the horde. 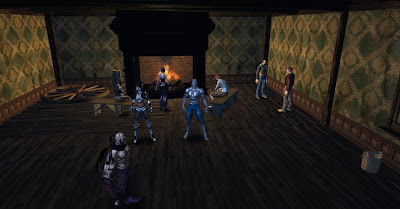 Outside the cabin is a snowy clearing and several other cabins that look abandoned; possibly, we're standing it what would be the middle of a dirt road if the snow weren't covering everything. 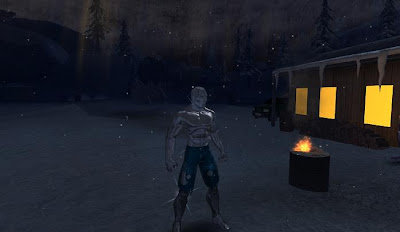 I actually think they did a really good job conveying the general atmosphere of a winter night in the mountains. It's deathly quiet except for the crackle of the burning barrel and the occasional low howl of the wind, and you can't see much beyond the street except for what's silhouetted against the sky. Snow drifts slowly to the ground all around and all the characters (including robots and skeletons and the like, but oh well) breath is visible in understated clouds around their mouths. Very nice, Champions.

There's also an indistinct yellowish dome around the cabin and surrounding area. It's only inside this dome that your time spent alive is counted; if you lived through an entire match but did so by hiding out in the woods at some random corner of the map or hovering a mile over everything, your time at the end of the match will reflect it. There's also a timer with thirty seconds on the clock that starts ticking down whenever nobody's within the circle. If all the players scatter, leaving the cabin full of civilians to fend for itself, they have thirty seconds (non-renewing) to get back or the match ends in victory for the zombies. Similarly, if they spend thirty seconds inaccessible... either by teleporting around or tunneling, or by flight so high that they're out of the dome... the zombies win. A player can still hide or TP around if there's at least one survivor left inside the circle holding down the fort for the team, but this prevents the last surviving character from just drawing the match out forever by staying underground or fleeing. Unfortunately, people often forget about it and will charge into the ranks of the zombies to get their killin' in, and then find that they've lost even though they're still alive and actively fighting the zombies, simply because they've gotten too far from the cabin. Although, considering the justification for the scenario is that we're defending the cabin in the first place, it makes good sense.

Anyway, for a minute or so nothing happens, and there's no sound but the crunch of snow under the feet of the nervous heroes running around in circles outside the cabin. Then, at the edge of the light, we start seeing the outlines of humanoid forms shambling towards us. One or two at first, but more and more as the first ones start to reach the clearing. The undead have arrived! Everyone goes to work; the summoners make their little circles and whip out their turrets and pets, the fliers go to strafe the zombies meandering into the circle, the guys who don't quite get the goal of the game run headlong into the horde to get eaten, and I post up by the door of the cabin and clobber any undead face that approach mine eye. 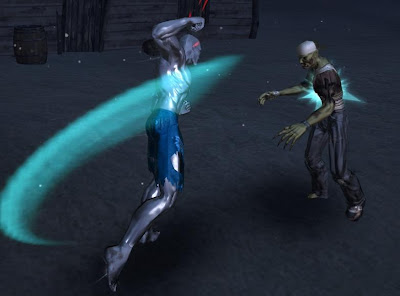 So far so good. Soon enough some of the bigger ones start filtering in. There are skinny ones that can can grab you with their tongues (WHICH IS A TOTALLY ORIGINAL CONCEPT), big fat ones that can bite you and hold you in place, and tall ogre-looking ones that can spit acid at you. I zero in on one of the big ones and deliver a sharp uppercut to his WHAT THE HELL WHY AM I ON FIRE?!? 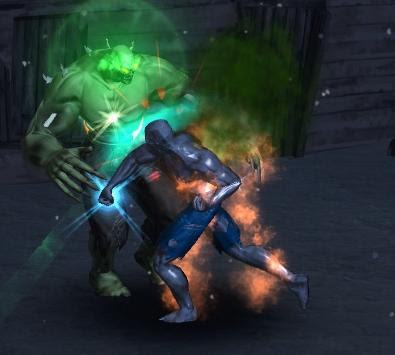 I'm not quite sure what's happening. Two of my teammates have already died somewhere and I have suddenly burst into flames. It's not the zombie character; I'd caught them out of the corner of my eye fighting with one of my teammates, and they're definitely a power armor type using lasers and machine guns and the like, no fire powers. So I'm a little perplexed until I notice that the zombies are exploding. Over and over again. Not just one kind, either. Like, all of them.

Apparently since the last time I played the zombie apocalypse scenario somebody at the company decided that giving the survivors a chance at winning the game was stupid, and it was much more entertaining for people to start dying the second the game starts and for the only goal to be outliving the rest of your doomed companions. I'm pretty sure I strongly disagree, if for no other reason than because the premise we're working under is that we're trying to protect the people in the cabin, and making that an impossible scenario is kinda bullshit. As the last of my teammates drops, burning and presumably confused, there's really no reason for me to do anything but hightail it into the woods and let the zombies win by running out the clock, but I can't just abandon all those people in the cabin, I decide. I'm surrounded by the ravenous undead and I'm the only thing standing between a dozen innocent people and a horrible death by supernatural cannibalism. The time for half measures and talk is over. This situation calls for desperate tactics. I don't like it, but once again I'm forced to resort to... 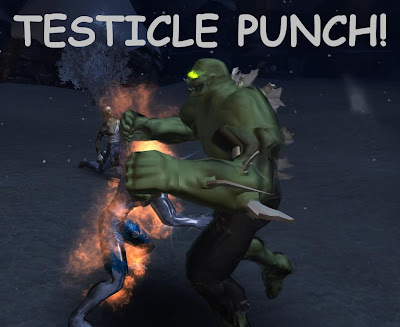 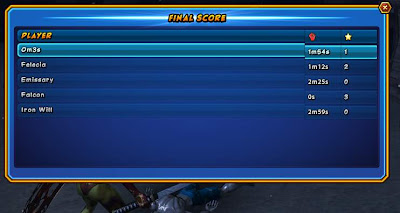 But, I fall last, at almost three whole minutes in, which I guess is the closest you can come to winning this game, now. Pretty disappointing; they were really on to something when they first introduced it.


Alright, that was one of the most unpleasant simulations I think anyone could have concocted, but I suppose it was pretty exciting. Never been a fan of horror movies myself, though, and that seemed to be more or less the holographic simulation equivalent.

Well, it's late, I'm humiliated and borderline traumatized, and even though it wasn't real, I swear I can still smell zombie on my fists. On the plus side, I have a luchador costume that I'm definitely holding on to, so the evening wasn't a complete waste. I wander back to the Bank And Trust and fold my mask and cape into my safety deposit box as surreptitiously as I can. A luchador isn't ever supposed to remove his mask, I think, but then, I'm not a full-time luchador. In fact, I, Iron Will, have never even met El Fierro, that handsome devil. Shhh.

My brief experiment with the Hero Games over, or at least on hold, I walk back out into the Renaissance Center. I swear I'll swing by that park and bother those guys for Defender first thing tomorrow, but first I want to check out the one place on Socrates' tour that I haven't been to yet: this Club Caprice place. It looks... interesting, at least. 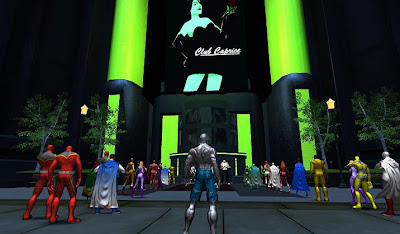 I wonder if they'll let me in.


Up Next: A night out on the town, the MIND-BLOWING CONCLUSION!