Well three weeks is a long time to not update a blog that doesn't even require the author to go outside for research, but I've been annoyingly busy with various steps in the grad school application process and trying to find a new job. So in lieu of Iron Will's awkward evening in the RP nightclub with the vampire kids, here's another (shortened) super heroing test for yawl. Instead of The Centurion, your proctor this time around is the one and only Cyberman, assisted in some demonstrations by our good friend Buzz Kill.

Though he shares more or less the same color scheme and placement with the Centurion, Cyberman is a completely separate character dating back to 2nd grade, created as half of a duo consisting of Cyberman and his brother Roboman, who were alternately cyborgs or guys in robot suits depending on whether we'd more recently watched Robocop or an episode of Iron Man. Walking around in slow motion making metallic noises and pointing at things we'd imagine blowing up was a pretty easy game to play when the ball courts or other choicest bits of playground real estate were claimed. Originally conceived on paper as a lopsided guy in a black metal suit with bright orange oblongs for feet and hands, an orange sphere for a head with a black rectangle for eyes, and an orange chest thing that could have been a bra or a vest or a piece of metal, he actually looks pretty darn good in Champions if I do say so myself. Once I discovered that most of the powers I'd ascribed to him in grade school (aside from telescoping limbs, tragically) were selectable powers in Champions, I kinda had to.

Unlike the Centurion, who's an all around heroic guy, Cyberman's more of a mercenary. For varying pay rates, he'll fix your computer, repair your car, or destroy fully armed military targets. Whether the path of a power-armored mercenary is for you can be determined via this short quiz.

The world of private military, security, and law enforcement contracting is as complex as it is dangerous. Contrary to what you may have heard elsewhere, not every situation can be solved with the same simple solution. When encountering hostile situations in the field, your response must be measured and effective, tailored to the specific situation you find yourself in to deliver maximum results with minimum expenditure of resources and time.

Unless of course you're being paid by the hour and charging for all materials expended, which I always am, and this guide presupposes you are as well.

An attractive young woman needs to make her way through an abandoned mine and fears that there may be dangers along the way. She does not offer payment and does not appear to have any valuables to negotiate with. Should you... 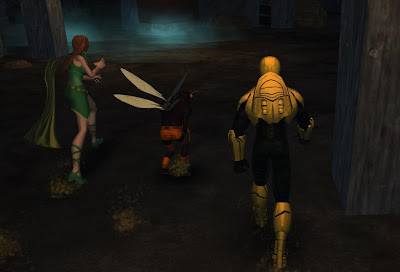 Answer: A
Never underestimate the power of good press and word-of-mouth advertising. Also note that the civilian is specified to be an attractive young woman.

A plain-looking older woman needs to make her way through an abandoned mine and fears that there may be dangers along the way. She does not offer payment and does not appear to have any valuables to negotiate with. Should you... 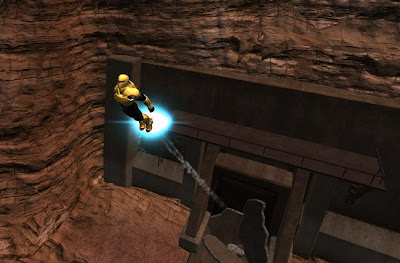 During a routine sewer sweep, you are attacked by a large man wielding a pair handguns that appear to fire .44 caliber ammunition. Your armor is more than capable of shrugging off small arms fire without damage. The best tool for bringing down this opponent with minimal force is... 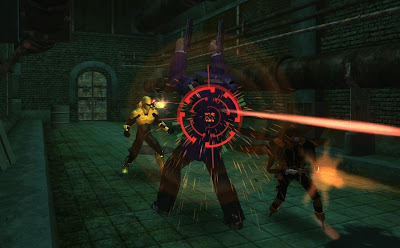 Answer: C
Getting sued is a pain.

You happen upon two members of a known street gang who approach you aggressively. It is too dark to see clearly without the night vision apparatus in your helmet, and neither man appears to recognize that you are armed. Both men are unarmed and appear prepared to strike you with their bare hands, which will result in no damage to you or your armor whatsoever. The best tactic for this situation is...

A. Announcing that you are armed and will fire upon them if they continue to approach.
B. Putting up your hands and backing away slowly.
C. Twin high-powered particle beams impacting directly with an unarmored sternum at close range. 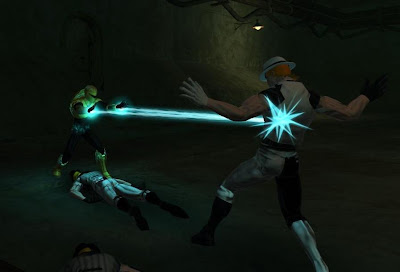 While on a fact-finding mission you are confronted by an opponent armed with a combat knife. You respond with...

A. Your bare hands. Your armor is designed to shrug off tank rounds and will not be compromised by a combat knife.
B. Your own standard-issue combat knife. Let's see who's better.
C. A goddamn chainsaw. 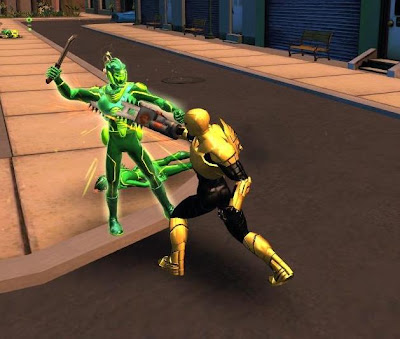 Answer: C
There's never a bad situation for the chainsaw.

Your team has cleared most of a building, but the last room is sealed off by a thick wooden door that has been locked from the other side. The blueprints of the building show no other way in and no ventilation ducts wide enough for a person to fit through. The best tool for getting through the door would be...

A. The automatic lock-pick gun in your glove.
B. A portable piston-powered battering ram specifically designed for effective door breaching.
C. A laser-guided anti-aircraft mini missile. 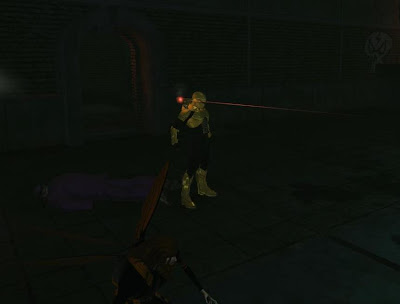 Answer: C
It's much easier to overcharge for an experimental missile than a broken lock pick.

You are charged by a mutant creature of unknown origin. Though you have tagged it with several shots already, it manages to make it within melee range without falling. Do you...

A. Just keep shooting it, it'll die eventually.
B. Attempt to sidestep it's charge.
C. Flee. 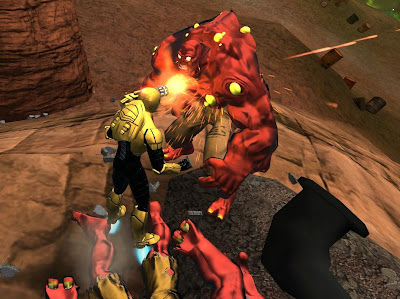 A job for a client specializing in the occult has put you into direct conflict with an unidentified fire-breathing hostile of unknown demonic origin which has managed to ignite your armor. Do you:

A. Ignore it and shoot the damn thing with a minigun.
B. Put some distance between you and your attacker and try to extinguish the flames.
C. Retreat. Magic and demons aren't the sorts of problems you can solve with guns. 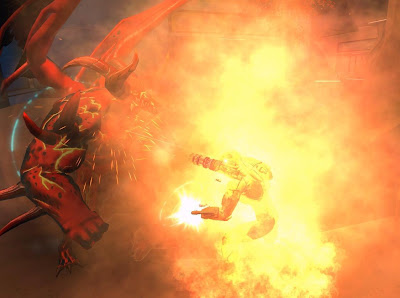 Answer: A
Welcome to the 21st century, jerk.

While sabotaging an illegal weapons manufacturer, you encounter half a dozen members of a paramilitary group who engage you in a firefight. Afterwards, all combatants have been neutralized and their commanding officer is out of bullets, though he had been firing upon you previously. Do you...

A. Take the commanding officer into custody.
B. Let him go, as he is no longer any threat and cannot prevent your destroying the weapons, which are your actual target.
C. Chainsaw him through the solar plexus. 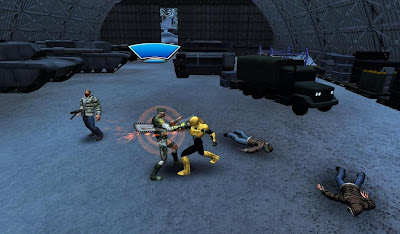 You are in a firefight with a well-trained opponent armed with a machine gun. Your opponent has taken cover behind a stack of metal crates that appear capable of repelling your small arms fire. Do you...

A. Wait until he reappears to take a shot and then resume firing?
B. Destroy the entire area with a missile?
C. Attempt to negotiate his surrender verbally? 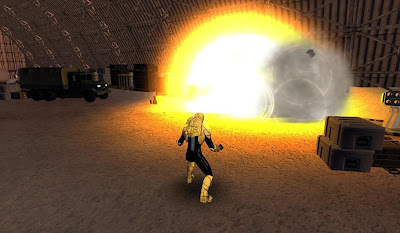 You have tracked down the leader of a cult which utilizes magic and other supernatural abilities. When you confront him, he begins a chant in a language you do not recognize. Do you...

A. Restrain him and gag him so that he can't complete what may be a dangerous spell?
B. Utilize your helmet computer's on-board translation program and attempt to decipher what he's saying?
C. Chainsaw in the gut. 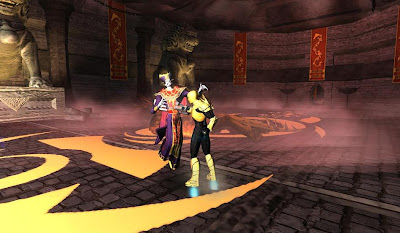 A hostile organization that you need to infiltrate is employing a small army of remote-controlled attack drones as a security force, each equipped with laser weapons but little in the way of armor. The mainframe which controls their behavior is located inside the very facility that they're guarding. You deal with them by... 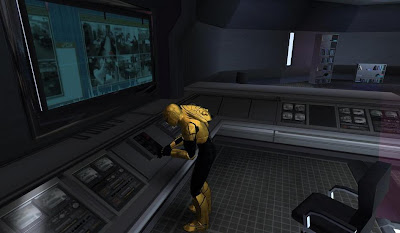 Answer: C
Now you're getting it.


This concludes our evaluation. Results are available for a nominal consulting fee of $200.


Thanks to Buzz Kill for his help with several of the missions pictured. 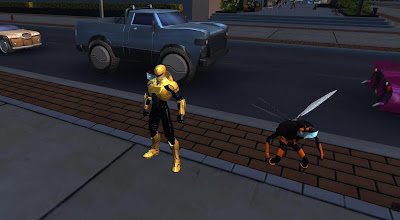