That's not my pun, alas, that's the name of the mission. Never thought I'd say this, but I really need to spend more time playing computer games. Sorry for the infrequency of posts this month.

One down, one to go. I scramble back down to the canyon floor (read: walk off the cliff and fall) and set off to find this Ferd guy, who I'm to beat to death before he has a chance to say anything, as superheros are often conscripted to do, I guess. He seems to be nowhere to be found, but there are plenty of other irradiates to keep me company, so I don't get bored. Much appreciated. 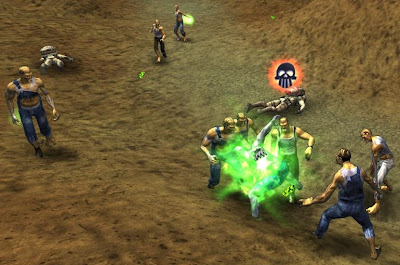 To pass the time we play a game where they throw glowing green crap at me and I punch them in the brain until they stop moving. It's pretty fun for me, and they seem to enjoy it.

Ferd is the first boss in the game you might have to team up for, but also the first boss that wanders around a given area who you'll have to hunt down and find before you can fight him. This proves to be much more of an obstacle than his actual difficulty level most of the time, particularly because everybody else in the area tends to be looking for him too, and you never know for sure whether he's actually around and you're just missing him, or whether he's dead and hasn't respawned yet.

On the plus side, this makes it easier to attract a team if you want one, because that means more people searching and less waiting around for a respawn, since you can all share one. It's this motivating factor rather than the challenge of the boss himself that makes teaming up with as many heroes as possible rather appealing on missions like this. Fortunately, it's the middle of the night and the zone isn't very crowded, so I go it alone. Kind of.

About ten minutes go by of wandering through the desert, alone but for the swarms of aggressive irradiates who keep on insisting on trying to hurt me, but then I spot him, shambling out of a hole that I must have already passed two or three times. Sneaky. I run over to make my displeasure known. 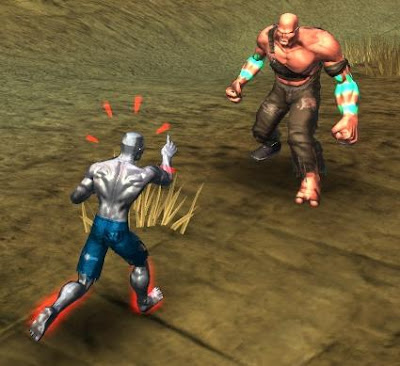 Ferd's about as tall as Alamagordo, but looks a good deal more normal. Apart from missing two fingers per hand, three toes per foot, and one nose per face, he doesn't seem all that different from your average nine foot bodybuilder with glowing arm tattoos.

Big fella, though. I'm going to have to come up with a good strategy to play against his unique size and strength and refine my tactics so as to pffffffthahaha!

Sorry. I run up and hit him a bunch of times.

As I probably ought to have expected by his stature and Vanderbilt's recommendation of teaming up against him, he doesn't go down very easily. He can't hurt me much, but I can't seem to hurt him much either, and he keeps calling in help from other irradiates that seem to just run in out of nowhere. Mostly because I have to keep turning and beating up his helpers to avoid getting mobbed, I start to worry about whether or not going in alone was actually a very good idea. 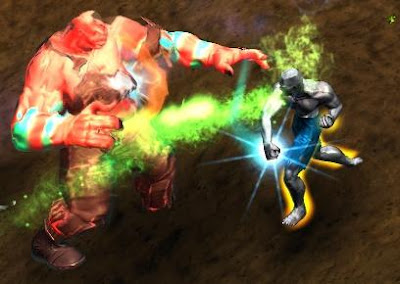 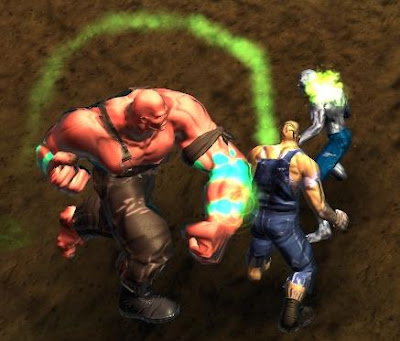 Just when it's looking like I might not come out on top, I'm suddenly assisted by the Dark Lord of the Sith. ... Wait, what? 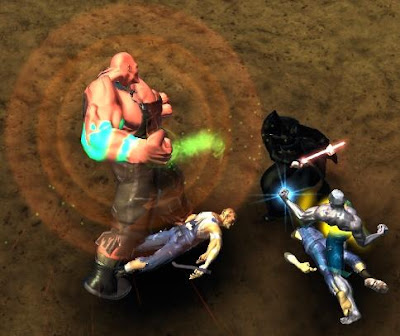 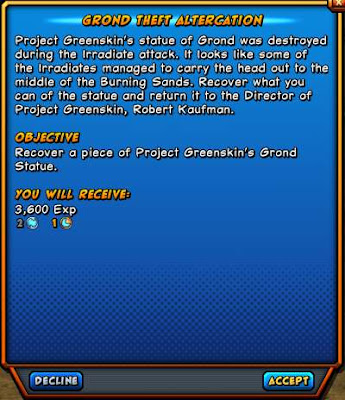 Anyway, I'm not saying that I couldn't have taken him on my own, but it goes much faster when somebody helps out with a lightsaber. As soon as the big guy's down, the little guy takes off. That was strange.

So, I start heading back to Vanderbilt, pondering the exact difference between assassin and superhero, when I come across a big stone head with horns. Interesting.

I um, suddenly remember (?) that the statue of Grond back at the base was missing it's head. This, therefore, must be the head of that same Grond statue, and it falls to me, as a superhero-slash-battlefield-assassin, to take a sizable piece of it back with me. Yes, this makes perfect sense to me. I jump down off the rock I was climbing up to beat the assorted mutants to death and retrieve the biggest piece of the statue I can. 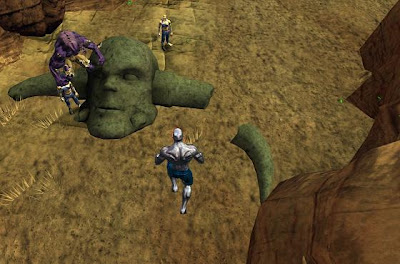 A short period of senseless violence later and I walk away with the horn, about twice my height and four times my weight. Don't ask me where I stowed it, because I honestly don't know. 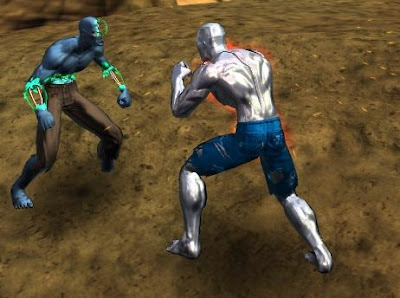 One more irradiate tries to stop me on the way out, some sort of weird half-Alamagordo without the face tentacles or the extra four feet of height. I don't know what his attachment to the statue's horn is, but he's a little bit tougher than the others. Not, however, tougher than either of the two big guys I put in the ground in the last fifteen minutes, or as bad as the big red one with all the arms. That dealt with, I continue on my merry way.

I head back up to Colonel Vanderbilt for my pat on the head and my next assignment. To my surprise, he also offers some insight into my recent transformation. 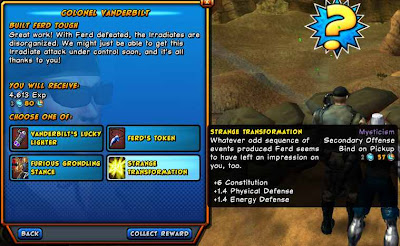 He also gives me some bad news; apparently this whole disaster has been the work of the evil Gigaton, stationed inside the radiation vault right by the base! This is terrible! ... Maybe. Maybe it's a good thing. I have no idea who Gigaton is. Let me guess: huge guy I have to beat up? Shiny. 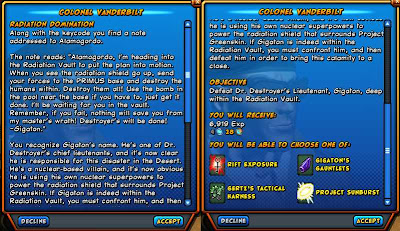 Wait, wasn't I supposed to rescue two of you...? He makes no mention of his missing partner, but this Gigaton thing sounds fairly important. So I suppose I'm heading back to base to find this radiation vault. That's all well and good, because I really ought to deliver this giant statue horn that I've been carrying around in my... pocket?... back to the Greenskin base. And that means talking to... erg... Kaufman. 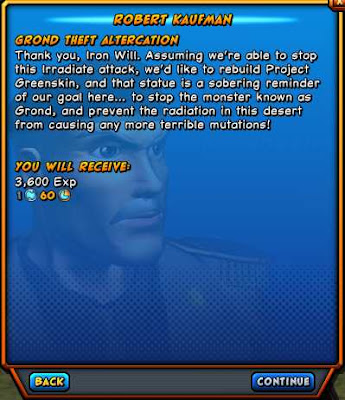 Right, right, and a bang-up job you're doing of it too.

Okay then. Time to find this vault thing and beat up this Gigaton guy to make the sky turn blue again. I don't understand this job as well as I think I ought to.