When last we left our hero, he was steeling his will and girding his loins to descend into the lair of evil known as...

The Vault. It sits heavy in the mountainside, it's dingy steel bulk contrasting sharply with the warm smoothness of the surrounding rock. Irradiated mutants with twisted and elongated limbs skitter over the cliffside like spiders and radioactive dust rises from the ground like snow flurries with every step I take.

... I'm about thirty feet from the turrets I reactivated an hour ago. How did nobody notice this place? 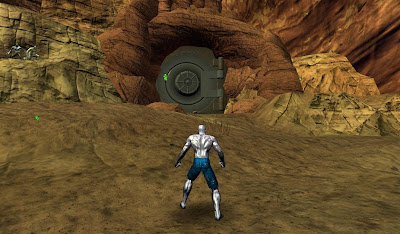 Whelp, looks nice. I head in.

Inside, the place is actually pretty cool. The floor seems paved, and the walls are relatively smooth carven stone. If the whole thing wasn't glowing an alarming radioactive green, I could see spending some time wandering around down here. Not fifteen feet in the door I find a backpack on the ground, and Vanderbilt radios me.

Oh, cool. So I didn't just abandon Gertz and his men to come in here and kill whatsisface. They've been in here all along, and I can probably save them on my way to all the violence. Alright, two birds with one stone. I keep going. 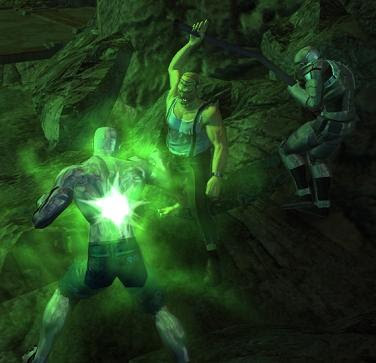 The passageway opens up into a wider cavern filled with rusted barrels and glowing green fog. ... I probably shouldn't be standing here breathing this stuff, but judging from my harmonica-voice lately my lungs just might be metal too, and besides, there's people in here that need my help.

In fact, I can see one of them from the tunnel, a Project Greenskin soldier huddled in the corner where an irradiate is beating on him with a lead pipe. Holy crap. These guys make Guantanamo Bay look like middle school detention. Not quite sure how this guy is still alive, but I jump to the savin'. The irradiate seems to be the garden variety ugly-and-bald type that I've been wading through since I got here, and he goes down without too much fuss. 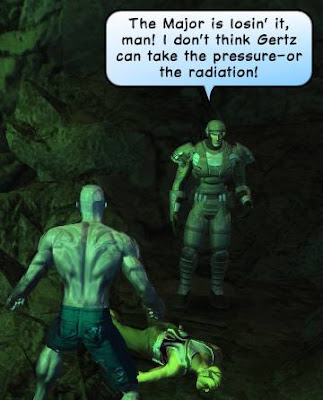 The POW has some bad news for me. Apparently Gertz is going a bit crazy, wherever he is. More importantly than that, though, as soon as I've taken out the irradiate, this guy who's been being beat on with a lead pipe in a cave for about two days stands up straight and tells me that he doesn't think his boss can take the pressure.

This man is amazing.

He takes off up the tunnel I just came down to go back to the Greenskin base and presumably get some medical treatment, brusquely declining my offers to help him limp out the door. I make it a point to track this guy down after this is all over. I'm thinking of putting a team together, you see. It consists of myself, Ironclad, Police Chief Surhoff, and Private whatever this guy's name is.

Together we're going to save the world. Drunk.

I move on, my faith in Project Greenskin at least partially rekindled. I find another soldier being menaced behind a largish rock further into the cave, on top of a pile of leaking toxic waste barrels. This really, really seems like the kind of place that probably causes cancer. 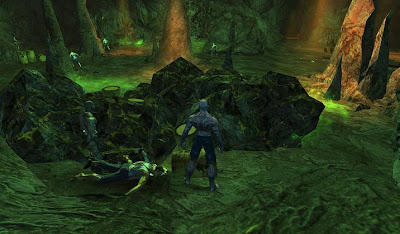 Kind of pretty in a way, though. I check to see if he's alright before moving on. 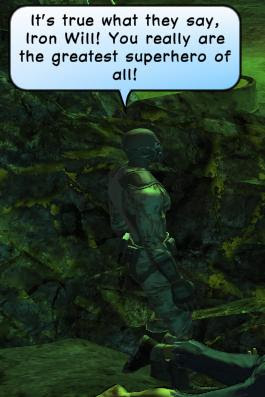 Yes yes, but can you tell me the way to-

Wait. What? They say what?

I love these guys. No, it's YOU, the poorly armed and mismanaged Project Greenskin soldiers, YOU'RE the real heroes. I throw him a salute as he runs out the door. Keep up the good work, soldier.

Beaming, I pick up a convenient weapon of opportunity and continue deeper into the tunnels. 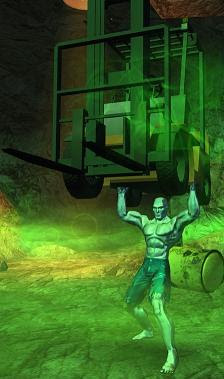 This ought to hurt someone.

I continue down the tunnel and forklift my way through a half dozen more irradiates before it turns sharply and descends to another big cavern, this one apparently an old military armory of some kind, judging from all the explosives neatly stacked along the walls.

There are more irradiates here, plus a half dozen robots that I recognize from Champions HQ. "Destroids" I think they were called, the robot henchmen of this Dr. Destroyer guy who Gigaton works for. I suppose that makes sense if they're all part of the same organization.

The moment I set foot in the cavern, though, my radio chimes in with a warning that the radiation below this point is so strong that it would burn through even my metal skin, and that I'd better activate that anti-radiation device that Mr. Tiller had me build. So, I do. It blinks to life and emits a shining golden shield that completely encases my body and evidently keeps out any harmful radiation. ... That's actually really damn cool.

Thus armored, I proceed around the room squishing irradiates and crunching destroids. The destroids seem the more significant threat, taking a lot more hits to bring down and shooting lasers at me which, although they don't hurt me much, do keep coming alarmingly close to the PILES OF NUCLEAR WEAPONS IN THE CORNER. 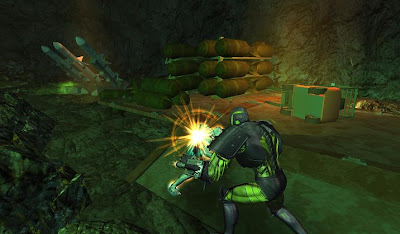 You guys sure you want to be shooting that stuff in here?

Eventually I manage to deal with all the destroids and head down yet another tunnel at the back of the room. A couple of the bigger purple irradiates with the chest-faces are milling around back there, but I manage to bludgeon my way through them without too much trouble. Then, finally, I see what I can only assume is my target. ... This looks promising. 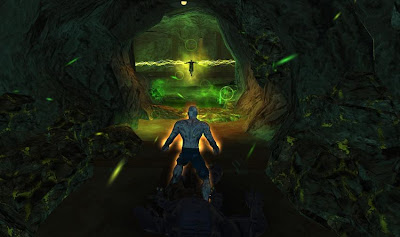 I'm pretty used to beating up giant irradiates at this point, but this appears to be the first caped one who's floating suspended in a huge beam of energy. I may need a strategy. Hmmm... 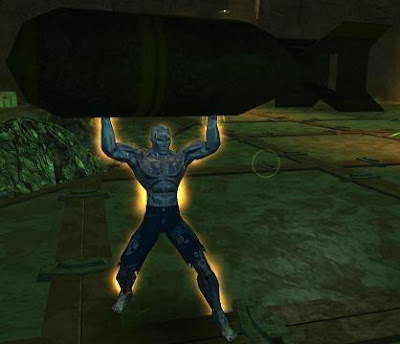 Actually, on second thought, that particular strategy has a high likelihood of backfiring. I put the atomic bomb back down and decide to go with pugilism instead. Hasn't let me down so far. I step out into the cavern and notice... Gertz? 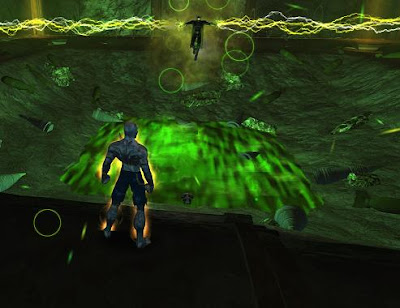 In case that's too small to see, focus on the area just to the right of Iron Will's right fist.

Gertz appears to be kneeling facedown in a pool of glowing green muck, repeatedly bowing to the floating Gigaton as if in worship. I get trying to placate your captors, but I gotta say, groveling on the ground seems a little bit excessive. But then again, he's the first Greenskin soldier I've seen since I came in here who wasn't actively being beaten with some variety of blunt instrument, so I guess I can't fault his strategy. C'mon, Gertz, I'm here to rescue you.

As soon as I start down the slope to the pool, though, Gertz jumps up and charges me, screaming something about bringing the light of radiation to everybody. He's got the telltale signs of severe radiation poisoning: one giant arm, a large two-toed foot, a general greenish palor. Looks like the major's gone... native? Rogue? I don't know the term. He's turned into a big green monster and spontaneously decided to attack me. Makes perfect sense, I hear radiation poisoning does that. Looks like the missing major, like so many other situations in the last day or so, is going to be solved by me hitting something repeatedly.

Not quite as repeatedly as I expected, though. After two or three good hits, the major takes off and runs back the way I came. I don't have time to go after him, though, because Gigaton lands right in front of me and just starts swinging. I was expecting some kind of evil speech or something, but apparently yelled taunts mid-fight are all I'm going to get. Lacking anything clever to say, I respond in kind. 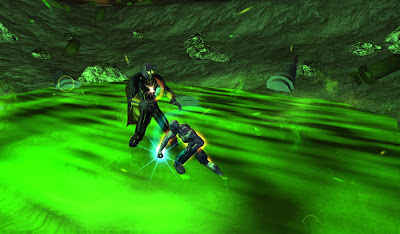 He's pretty big, but not Black Talon big. Pretty tough too, but not Ferd tough. He hits pretty hard, but not Alamogordo hard. Really, I'm less concerned about the fact that a giant caped supervillain is pounding on my head than I am about the fact that we're fighting almost genitals-deep in a glowing green pool filled with decaying nuclear warheads.

... My children are going to have flippers.

As soon as Gigaton's down, the entire mountain starts shaking, and giant chunks of rock fall from the ceiling. Whoops, time to go. I leave the possibly-dead-possibly-unconscious Gigaton to drown in the toxic water or get crushed to death by falling rocks as he sees fit and race back up to the entrance, occasionally avoiding a falling boulder on the way. The dust makes it pretty hard to see, but I get there okay, only to find... 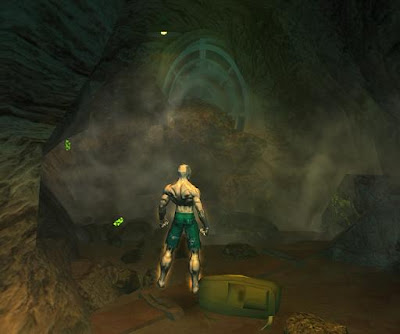 Looks like, for the second time in as many days, I'm going to spend my afternoon digging my way out of a pile of rubble.

This greatest superhero of all thing kinda blows.