In which our hero sees the light at the end of the tunnel that is the Tutorial.

I wander back out of the alley directly into twin beam weapons from another of the tall alien bug types. They push at me a bit, and I find my feet sliding along the ground, but it still can't seem to hurt me. Sighing, I look around for any signs of Kinetik, but he's long gone. Not terribly interested in redeeming himself by engaging any of the alien invaders, then. It takes a few seconds to walk up to the guy with both his beams on me, but it doesn't hurt any more than walking upstream in the lazy river at the waterpark. I eventually walk right up to him and punch him in the brain. Right, okay, gotta find the good doctor. 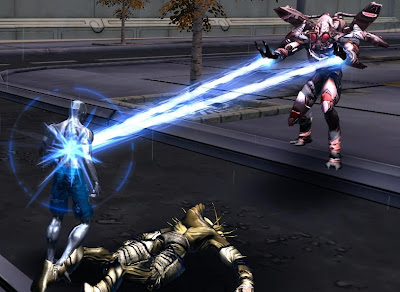 Another way that Champions Online's combat is a bit more interactive and a bit more strategic than it's contemporaries is it's liberal use of knockback effects. At this early point in the game your character will still only have two moves, which for most powersets won't yet include any of these, but they're fairly common later in the game. Things like positioning of your character relative to the enemy and the proximity to any sizable ledges or holes comes into play, and the relative strength of your attack usually dictates the distance of the resulting knockback. These twin plasma beams (which are actually a power you can get for yourself later on) exert a constant pushing effect that can be struggled against for as long as they're maintained. Most of the knockback powers that ol' Iron Will here is going to be getting will be of the single whallop variety, which will only impact once and send a character a given distance, and can't be canceled if the initial attack wasn't successfully blocked.

There're also neat ranges and areas that attacks are effective in, like some that will affect one target directly in front of you while others do damage in an arc or a cone, some will affect everything on a line, some in a radial burst around the character, and some in a radial burst around the target, which can be a character or a spot on the ground depending on the power. It can get reasonably strategic, but seeing as we don't have any of those powers yet, I'll blather about it in exhausting detail later.

Fortunately, Doctor Silverback's hologram is visible as soon as I set foot on the street, so I walk over there. I pause for a minute before handing over the Sonic Pacifier to this guy. On the one hand, he's a gorilla in a lab coat, which strikes me as not only powerfully amusing but also completely trustworthy. On the other hand, he's a hologram on a pedestal, which has usually meant a murderous artificial intelligence in the past.

In the end, the fact that he's a gorilla in a lab coat wins out and I hand over the Sonic Pacifier, which can apparently be analyzed by the same machine that projects the hologram. Handy. I try to remember all the sign language I know from high school, but then Silverback starts talking. Embarrassing. 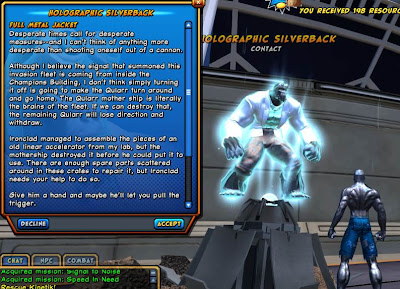 Wait, wait, shooting oneself out of a cannon? I should have known. Every holograph in the game seems to want me dead... but wait. He might let me pull the trigger? Does that mean I wouldn't be the projectile? I'm a little confused.

Well, I'll help this guy repair his doohicky, anyway, but I draw the line on stupid self-destructive missions at shooting myself into orbit.

I head up the ramp behind the holographic Silverback and find myself in a courtyard in front of a massive blue building that seems to be the Champions headquarters. There are Qularr flying around everywhere fighting armed army or national guard soldiers while AA guns fire at the various Qularr fighters filling the sky and bombarding the ground around them with some kind of explosive energy weapons. Several other superheroes, including the one who I recognize as Ironclad, are running back and forth amidst all this chaos taking down as many of the Qularr as they can, and in the middle of it all is a giant cannon angled up towards the massive Qularr mothership. A wild shot from one side or the other blows a massive chunk of concrete out of the wall right next to me, showering debris all over the ground around me, and just a few paces to my left one of those little orange beetle things has just immolated a soldier who's still firing his rifle at the aliens even as he burns. Right. Guess I have some work to do. 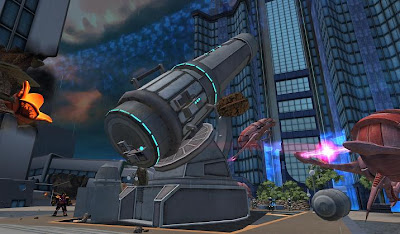 One of the coolest things about Champions Online is it's Public Missions. The best comparison I can think of is that these are basically like pick-up games of basketball in the park. A chunk of the map will be designated as the mission zone, but it isn't instanced or anything; players are free to come and go as they please. The mission goes on and on in an endless loop, and passing heroes can just sort of drop in to help or play through the whole thing once or several times if they prefer. In this particular public mission dubbed "Battle Of The Ironclad" the players have to defend the cannon from the aliens by first killing thirty of them (this can be accomplished by five players getting six each or by one getting thirty while everyone else stands around and watches) and then by opening ten crates to find repair parts, which again can be divided up amongst present heroes however they like. In this particular public mission, the majority of players seem to want to keep going around beating up aliens and it's up to one or two people to actually go around and collect the crates. There's nothing wrong with this, but the mission won't progress to it's next stage until all ten crates are picked up, so one instance of Battle Of The Ironclad can last for hours if everyone wants to let it continue. After this, there's a two minute countdown during which players have to protect the cannon, and then the mission resolves, everyone gets an exp reward and an item and it ranks everybody's contribution on a little scoreboard that appears in the lower right corner, then it resets a minute or so later and starts all over again.

These are some of the coolest things ever. First off, it allows people to just come in and contribute a bit and then leave again, if they prefer. If I'm into killing Qularr but not so much sticking around for the whole mission, I can just drop in to kill three of them and then leave, and my contribution would still be counted towards the overall mission. It also encourages teamwork among random strangers, as you don't have to be in a team or anything when starting the mission, but most of them are difficult enough to require the cooperation of at least two or three heroes. This one being in the Tutorial section is an exception, and the entire mission can be completed by one hero if preferred. Also, they keep playing out whether anybody's there or not; several times I've come across a public mission with half of the objectives completed and nobody around.

Most of the public missions in the game follow a similar formula: kill X number of something, activate/collect/destroy/use X number of something, and then survive a countdown or beat a boss within a limited amount of time. The bosses are almost always immensely powerful and will require you to call for help to beat them within the time limit, but not always. Exp, Item, Scoreboard. And that's how they go: basically an unending pick up game, except that other players can't pull a knife on you if they don't like the way you ball.

It's a pretty awesome idea in my humble opinion that really puts a focus on the multiplayer aspect of MMOs, and one I hope to see other games shamelessly imitate in the future.

We've got a guy who looks kinda like a raver in snowboarding pants over on one edge of the courtyard shooting green lightning at the bugs, a huge guy in purple armor running back and forth and pounding the Qularr into submission whenever he catches up to one, a mobster with a pair of six-shooters gunning down most of the flying ones, some kinda robot covered in blades, and of course Ironclad, another of the Champions. Okay, yeah, we got this. 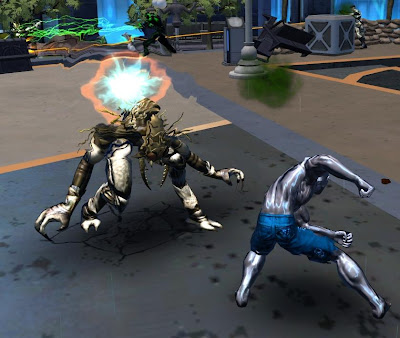 Ironclad, as it turns out, is nothing like the other Champions. Instead of standing around carefully avoiding doing anything helpful, he's running around like a madman beating the living snot out of aliens faster than I can, ripping chunks of concrete out of the ground and throwing them at the ones he can't reach, and just generally kicking so much ass that I start to wonder if the rest of us are even necessary. I'm starting to feel more like a sidekick than a savior, and it's refreshing as hell. Now THIS is a superhero I can get behind. 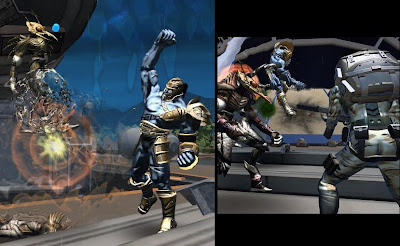 Between the six of us we manage to wipe out the first wave of Qularr in record time. Then Ironclad shouts that we need to recover parts to repair the cannon from the crates scattered around the courtyard. Yes sir Ironclad sir! 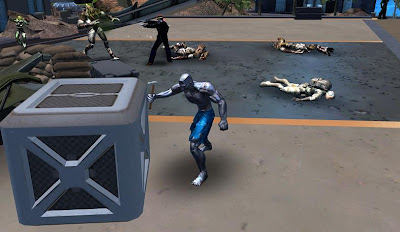 The mobster guy and the raver guy manage to keep the Qularr ground troops off my back long enough for me to pry the crates apart and recover the spare parts. So far so good! Now we just need to defend the cannon long enough for the mechanics to do that voodoo that they do so well. 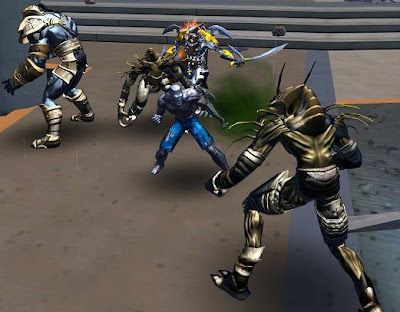 Me and the bladey robot guy go back-to-back with Ironclad, who keeps yelling out inspirational sayings about the glory of battle and defending the earth while he slings chunks of concrete at the aliens. I can't see what the other guys are up to from where I am, but whatever they're doing, none of the bugs even get close to the cannon before it's repaired. 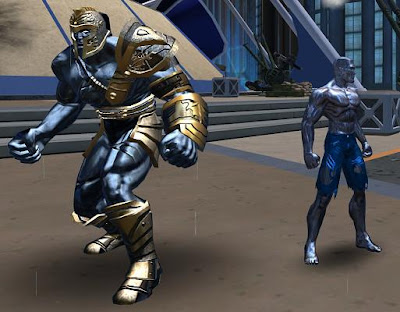 And that's a flawless victory for me, Ironclad, and whatever the other guys' names are. I'm feeling pretty damn good about this. Plus, I think I've finally settled on a name for myself. I'm going to be Iron Will, in part to honor Ironclad, mostly because it's an old saying anyway. I like the sound of it.

I head back to Doctor Silverback to report our success at repairing the cannon, desperately hoping he doesn't try to shoot me out of it. 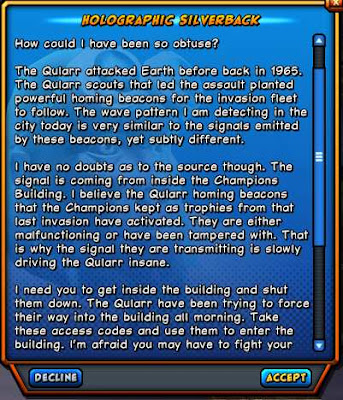 Oh, jeeze. It turns out the Champions are basically responsible for the whole thing, after having kept some Qularr homing beacons after their last fight with the alien invaders. Now these beacons are apparently drawing invaders from across the galaxy directly to the building right behind me. Champions... man, I don't even know about you guys anymore.

I'm betting Ironclad had nothing to do with this decision.

So my job is pretty straightforward. I'll have to sneak into the Champions HQ building and shut the beacons down to basically call off this whole invasion. Sounds simple enough. The door is apparently still sealed, too, so there shouldn't be any aliens inside the building for me to deal with. All I've gotta do is go in there and flip some switches.

What could possibly go wrong?