Our continuing playthrough of Champions Online picks up where it left off: like fifteen minutes into the optional segment before the game even officially starts. 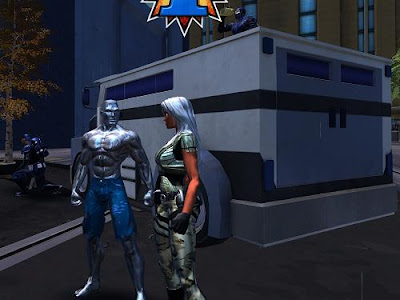 Around a corner and down an alley from Surhoff's encampment I find the friend he was talking about, a woman called "Silver Avenger Mayte Sanchez". I can't really tell if she's a superhero and Silver Avenger is like a code name, or if it's the name of the outfit she's with, or if perhaps Silver Avenger is a rank like Corporal or Captain. Maybe that would put her second in command of her organization after Gold Avenger so-and-so? She's not dressed like a superhero, so you never know...

Oh, shoot, she's been talking. I should pay more attention. 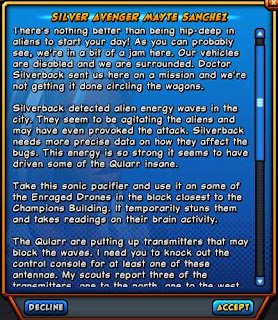 Okay, so... alright... so, she wants me to use a gadget called a Sonic Pacifier to stun some of the aliens, but only the angry ones. And, at the same time, this Sonic Pacifier will also scan their stunned angry brains. Their brains need to be scanned because these angry aliens are being angered by aliens, and we need to figure out exactly how, except that we know how because we can see their alien anger transmissions. But these angry aliens are also setting up an alien transmitter that will stop alien transmissions and possibly make them less angry. This is a bad thing because we need the aliens to be angry to find out why the aliens are angry, other than what we know, which is that the aliens are angry because angry aliens are transmitting something that makes them angry that they're trying to block with an alien transmitter. These are orders passed down from a guy named Doctor Silverback who I've never heard of before. This is particularly upsetting because my back is silver and this is one more name I won't be able to use as a superhero.

Man, she didn't even get into how this gizmo works and I'm all kinds of confused. Even though I'm fairly certain that there's been a miscommunication somewhere along the chain of command, I figure I'll do what the possibly-superhero-possibly-soldier says and just assume that she'll get blamed instead of me.

Before I leave, though, I notice an old woman standing amongst the soldiers staring at me. When I talk to her, she explains that she can't find her cat, Reggie. I hand her the mindless ball of murder with the easily personified face that's been trying to slash my wrists for the past half hour and she squeals with delight. Some people, man. 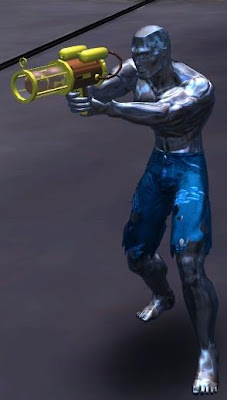 Okay, so, I take this Sonic Pacifier and set out to use it on aliens and break some of their stuff. Simple enough on my end, I suppose. It only takes about half a minute to find some of the big angry bug guys stomping around at the end of the street. I pull out my handy Sonic Pacifier which looks basically like a gun, point it, aaaaand...

He explodes. Holy shit. His buddy looks at me, mandibles agape, and then charges in looking like he wants to tear my head off. I suppose that's fair. I point the dread device again and, you know, pacify him. Sonically. 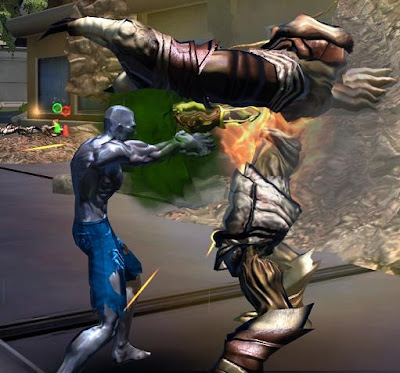 This is a little disturbing. There's burning chunks of exoskeleton fluttering down through the air and dousing themselves on the thick coating of alien blood that's all over my skin, and I can't imagine that the device has had enough time to get any sort of a detailed scan of their brains... which appear to be all around me. I look for the little display on the gun, but only find a decal that says "FoxBat's Limited Use (TM) Explosive Foxbat Ping Pong Ball Gun." Um. Oops.

The way that item use works in Champions Online is actually pretty handy in general. Rather than having to go through your inventory bag and double click on an item every time you want to use it, you instead have to drag that item to a smaller ready-to-use bar on the bottom of your screen next to your powers and moves 'n errything. Think sort of like the "belt" slots from Diablo, where you would put things from your backpack that you needed to get to quickly. If there's nothing else in your ready-to-use bar and you receive a usable item (as distinguished from equipment or mission items that you can only use at one place) the game will automatically put it there instead of in your equipment. In this particular circumstance, I already had something there from the Foxbat's Weapon Case mission and had forgotten about it, but the Sonic Pacifier went in the slot right next to it, so no problem. Just need to keep track of which icon's which.

Well that's embarrassing and gruesome. I fire the last exploding ping-pong ball in the general direction of some more Qularr down the street and huck the expended gun over into some rubble. When I'm telling the newspapers about today later, I think I'm going to have forgotten the "thought the Sonic Pacifier was a handgun" part. What was I thinking? I dig around in my pocket and pull out the actual Sonic Pacifier, which is... a weird handgun looking thing. Oh. Hrm. 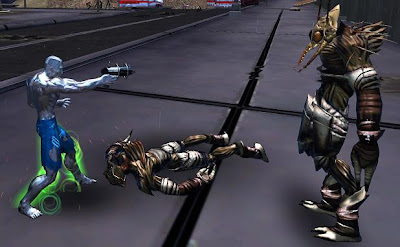 Well alright then, take two. I make my way a little further up the street from the gooey crater that was my last attempt at taking some readings and fire this newer, sleeker gun thingy at one of the giant insects. It seems to send out this transparent beam of... I guess sound?... that makes the big tough insect guy shrivel up into a wan husk of his former self, paw uselessly at the air, and then collapse to the ground and die wheezing. This um... this doesn't seem much better than FoxBat's anti-tank handgun I was using a few seconds ago, but apparently it's taking the readings we need, so I keep doing it. Science is gross.

Okay, so now that unpleasantness is taken care of, I have to find and destroy the transmitter that was making these guys so big in the first place. Or, destroy the transmitter that was going to make these guys less big. Or something. It's pretty hard to miss, though, as it's a giant pulsating mushroom thing next to a big pink vaguely Giger-esque spider antenna thing just a little ways up the street. I probably should have saved the last Foxbat Ping Pong Ball shot for this thing, but whatever it's made of, it's probably not as hard as my fists! I run up to it and start pounding away at it, putting a bunch of hand-sized dents in it until it's lights go out and it quits humming and, you know, shuts down. Except that doesn't happen. Instead, the damn thing explodes in my face. 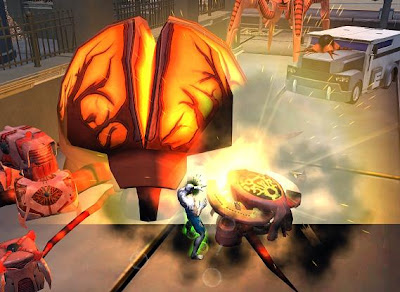 I'm getting pretty tired of being sent on missions designed to kill me. I mean, I suppose it's possible that Silver Avenger Mayte Sanchez didn't know that the thing had a bunch of explosives in it... which, I admit, is pretty unintuitive... but I have a sneaking suspicion that she and all her swat team guys are either having a good laugh at my expense, or being scolded by Socrates for failing yet again to kill me. I suspect my next mission is going to be something along the lines of flying a fighter plane full of nukes into the alien spaceship or running up to hug some of the Qularr ground troops with a belt full of dynamite.

Heading off to deliver the pacifier's scan data to Doctor Silverback, though, I hear the squawk of a radio from inside a police car asking for help. I rush over for a better listen. 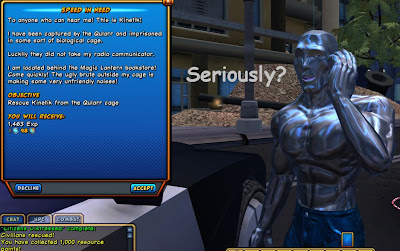 The look on my face here pretty much says it all. Apparently Kinetik, another of the vaunted Champions, has gotten himself captured and put in a cage by the Qularr. Kinetik, as I understand it, has Super Speed as his one and only super power. If there's one superhero on earth who shouldn't be able to be captured, it's Kinetik. But then, I have no idea what sort of forces were brought against him or what kinds of weapons they had, so I probably shouldn't judge. I run to go find him behind the Magic Lantern bookstore, which is only about a block away. 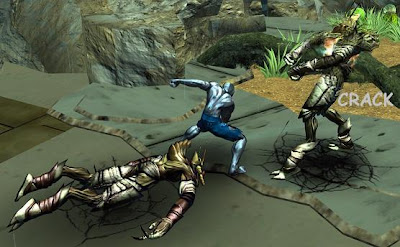 There's some minor resistance along the way. Good ol' fists still seem to be getting the job done faster than that pacifier thingamapoop, although admittedly less completely than Foxbat's gun. That guy must be a hell of a superhero when he's in his element and has time to prepare. I wonder if he'll need my help more often when this is all over. I'm starting to think I probably won't need an alter-ego superhero identity, since I'm probably going to be pretty recognizable all the time. So what should I go by that I'll actually remember? I like William, but it just doesn't sound all that heroic. I still haven't run into anything that can actually hurt me, so I should probably use that somehow. Invulnera-Bill? Nah. Indestructi-Bill. Hrm. Invinci-Bill? That rolls off the tongue better, at least... 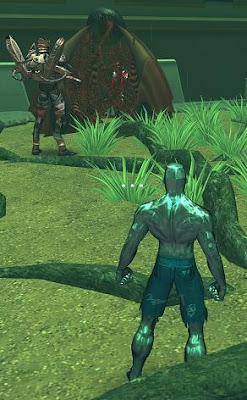 I'm batting aside Qularr so easily that I almost don't notice that I'm already behind the bookstore. I look around and see Kinetik in his cage... which is a flimsy looking thing made out of the same Qularr tubing as all their other machinery that I've been destroying, and guarded by a single soldier, one of the tall ones.

... That's it. That's the entire force preventing him from making his escape.

I dunno about these Champions, man. So far I've only met two of them, but one didn't realize people were in imminent danger fifteen feet in front of her eyes and the other can't take a single Qularr soldier or figure out a way out of a cage I could probably squeeze through without having to break in the first place, at normal speed. I mean, seriously, one guard? I killed one of these guys a little while ago by punching him in the crotch. Once. For plane tickets.

Well, alright then, I'll help this guy out, but I'm getting pretty disillusioned so far. Maybe after all this they'll let me onto the Champions and trim some of the fat. Or maybe I can get on whatever team FoxBat's on. Or work for Surhoff. Yeah, that'd be better.

I run right past the alien and up to the cage. He flips out and starts shooting me with some kinda blue energy beams that I can't actually feel, so I mostly ignore him and focus on springing Kinetik. There looks to be some kinda complicated locking mechanism that I probably couldn't figure out if I tried, so I just tear the door off. 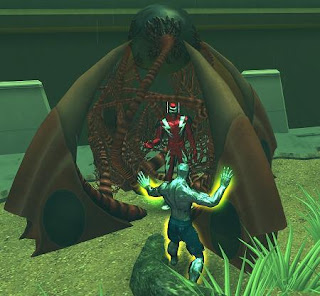 Woo, yay, you're free. Now that you're out, all we have to do is kill this bug guy and- 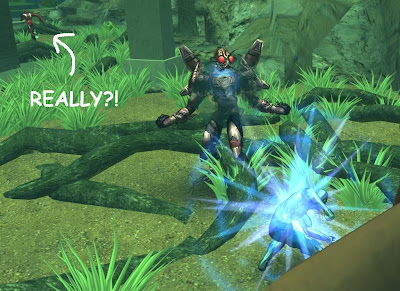 Oh, you have got to be kidding me.

Alright, so, I guess, I guess you're just gunna use all that superspeed and just run away, then. That's great. That's very impressive. Go Champions.

I kill the big bug guy and wander back out onto the street, shaking my head slowly. I didn't want to get a big head, but you know what? This city DOES need me.

UP NEXT: Gun-related shenanigans part 2!