The first boss I actually want to work for.

In which our tour guide Iron Will takes us through the third section of Champions Online's tutorial, which you probably could have completed on your own in the time it'll take to read this. 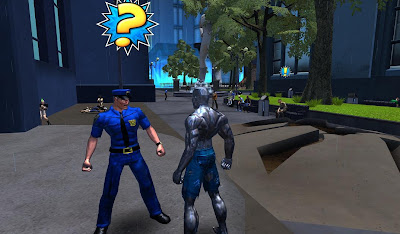 Unsurprisingly, the police chief's refugee camp seems a little more well-thought-out than the one run by the politician, vacant supeheroine, and murderous artificial intelligence triumvirate. I first notice this when I actually have to turn sideways to get through the hastily constructed police car barrier they have at the end of the alley, although it still seems to rely entirely upon the extremely advanced alien invaders from light years away not having mastered projectile weaponry, as many of the convalescing survivors are in plain view of some of the flying Qularr like the one I pegged with a bulkhead before. I assume that the Qularr have some sort of weird warrior honor code thing that I just haven't picked up the specifics of, yet. Like, it's okay to send big beetle-lookin' fighter jets in to shoot at the ground with lasers, but using large-yield weapons to just flatten a city which would take a negligible fraction of the energy spent to get here in the first place are considered dishonorable. And while you can shoot at stuff in the ship, once you've set foot outside, you have to go hand-to-hand or spittle. Unless you're one of the flying guys. I don't know, it's a complicated honor code.

Surhoff, I'm encouraged to discover, has a sweet mustache, and clenches his fists when I walk up like he's ready to deck me if I threaten any of the civilians behind him, despite the fact that I'm a walking metal statue. I tear a lamp post out of the ground for no reason, throw it into the side of the building, and report for duty.

A convenient feature of Champions Online that winds up being inconvenient more often than not is the context-sensitive Z button (or other key of your choice). It basically fills the role of double-clicking in most games. Press Z near an NPC to talk to them, press Z near an object to pick it up, press Z near a computer terminal to access it, etcetera. The problem arises when your character is standing near several objects it could theoretically interact with, and the Z button doesn't know which one to latch onto, and seems to have an uncanny knack for putting the most likely option dead last on it's list of possible interests. If you're trying to open a door next to a stack of crates, you can be reasonably sure that the game will think you want to hurl each and every last one of those crates at the door before trying the knob. Fortunately, it also gives a little list of all the actions the Z button will cover that you can click on to select an action for yourself, so you don't have to work your way through every option first. It generally works out okay, there are just some places where it always seems to do the same thing. Chief Surhoff next to the lamp post is one of these places, and if I hadn't been one of the first to him after the lamp post respawned, you can bet somebody else would be hucking it into the wall instead of me.

Surhoff looks me up and down, seems unimpressed, and then starts listing things that need doing and politely asking if I'll help. Not only that, but the things that need doing seem, quite shockingly, perfectly reasonable. There are people trapped under the rubble, would I help dig them out? There are ambulances wrecked out there, could I recover medical supplies for the survivors here? Qularr are detaining and attacking rescue workers that are trying to do their jobs out there, can I go help them out? 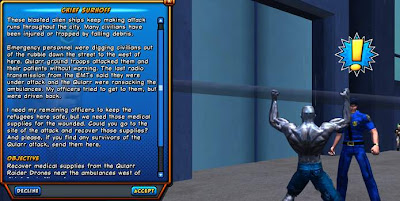 He doesn't ask me to go get myself shot or beat up inanimate objects or anything; he'd like me to help with the survival effort and assist the authorities in doing their jobs. This is downright bizarre.

Hell yes, sir! I will do all of these things for you! I apologize for destroying this lamp post!

Feeling like I'm working with intelligent professionals for the first time, I turn to go, but one of the survivors waves me over, a guy named Griswold. Apparently he needs some help too, and while I'm out serving the public, I might as well help out the little folks, too. Very well, citizen, what do you need? 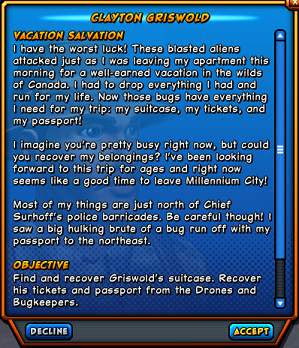 Um... he wants me to go look for his... vacation stuff. Because it was going to be an awesome vacation, and this lousy alien invasion made him drop his stuff.

I'm pretty sure two of those folks out on the ground behind me are dying, but no, you're right, you have the worst luck. 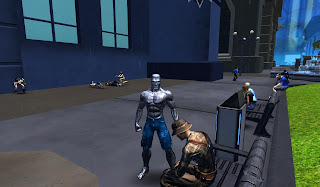 In foreground: myself, man weeping over lost plane tickets. In background: two people dying of massive internal injuries while a lone unequipped firefighter tries against all odds to save their lives. 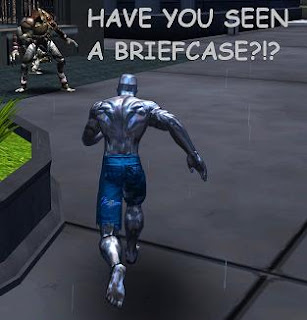 It takes a few minutes, but I eventually find his briefcase, his plane tickets, and his passport, which was for some reason on a newer, bigger kind of Qularr that I mugged in an alleyway. I couldn't reach his head, but apparently punching them in the pelvis also kills them. Good to know! 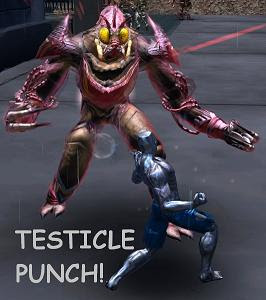 So that vitally important mission dealt with, I drop off the vacation supplies with the unluckiest man on earth, run past some dying folks and out onto the street to dig more dying folks out from under rocks and kill some more aliens.

It doesn't take long to find some people trapped under massive pieces of concrete from the buildings above. It's actually pretty impressive that they lived through it in the first place, come to think of it. Whatever. I haul the giant chunks of rock off of them and send them scurrying off towards Surhoff and relative safety, then I use the same giant rock chunk to go splatter some aliens standing nearby until it breaks, lather, rinse, repeat. It seems like a pretty good system, and an actual good use for my newly-discovered super strength, since these rocks gotta weigh a ton or two. I like the way Surhoff uses his human resources.

A few superheroes (or should I say, OTHER superheroes?) are running around the street doing the same thing, so we keep it up until everybody obviously trapped under a rock, car, or other piece of debris is freed. It's a pretty good team effort, and I seem to be holding my own. I start thinking of names for myself again. Chrome Champion? Ferrous Fighter? Think, William, think. 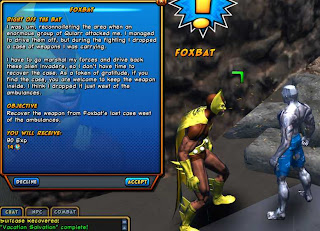 In amongst the trapped civilians is one strangely-dressed guy calling himself Foxbat. I can't tell if he's a superhero or not... he seems to have gotten himself stuck under a not entirely impressive piece of rock. When I haul it off of him, he thanks me and says that he's going to go marshal his forces to help drive the aliens back, so I guess he is a superhero, just not a strength-based one. Fair enough. He also tells me that he's left a case of weapons around somewhere, and that I can have it if I find it. Haven't needed them so far, but hey, that sounds pretty handy. Thanks, man! He runs off toward relative safety and I go the opposite direction, being significantly more durable than he probably is. I think I've made my first friend in the superhero community!

The case is actually only about thirty feet away, but being examined by three Qularr of another new type, looking a lot like the regular ground-types but much bulkier. They still go down pretty easily, though, and I pick up a FoxBat gun, whatever that is. All that dealt with, I remember the ambulances and head over there.

Just as Surhoff told me, there are assorted firefighters and paramedics being menaced by Qularr ground troops. This, I must say, pisses me off a little bit. I jump in between the nearest firefighter and the offending Qularr and pound the bajeezus out of them with perhaps a little more enthusiasm than the ones who were minding their own business. He thanks me and runs off. Three down, a couple dozen to go. 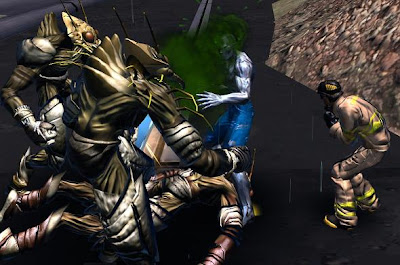 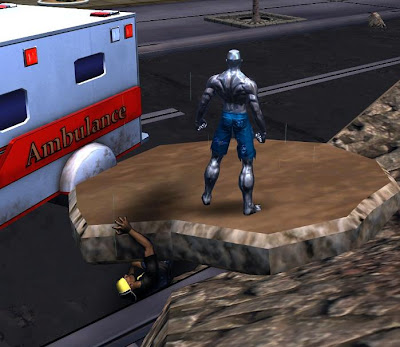 About ten minutes later my fists are completely coated in green alien blood-goo, I've got an armload of medical supplies, and there are no rescue workers being menaced anywhere I can see. I stand on a rock for a while, enjoying the relative peace and basking in a job well done, pondering superhero names again. "Thanks for the help, Gilded Guardian!" Nah. "You saved my life, Platinum Protector!" Too many syllables. "I think I love you, Die-Cast Defender!" Hrm. The alliteration thing isn't working out so well.

I pause about half way there. Was that a meow? Down another side alley I find a cat in a carrying case. Now, don't get me wrong, cats are overrated as hell, but if I'm going to be a superhero now, I suppose I've got to rescue everybody that needs it, even if they would just bat me around and torture me to death for their own sick amusement if the situation was reversed. Friggin' cats. I scoop it up, ignoring it's repeated attempts to scratch my arm off, and head back to the camp. 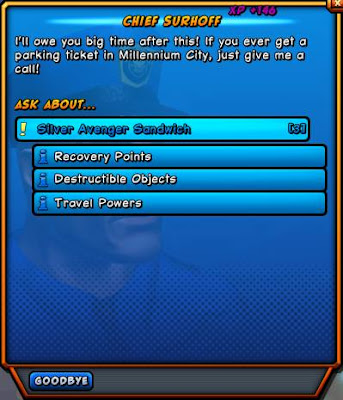 Surhoff seems quite pleased when I show back up with medical supplies for the injured and a report of success on the rescues. I suppose he already knew about the latter, as they've been coming back here, but still. I swear I think I almost see him begin to crack maybe a smile. He doesn't thank me in as many words... we're entirely too professional for that... but he does let me know I've got a friend in the police department if I need one. Surhoff, man, you're awesome.

Since he's got a handle on everything around here, he asks if I'll go help out a friend of his a few blocks away. I'm a little reluctant to leave the first authority figure I've run into whose leadership I respect, but I'll go where he thinks is best. I resist the urge to ask him to adopt me as a son, sling the hissing little monster over my shoulder, and take off down the alleyway, confident he'll take care of everything here.


UP NEXT: I'm not even sure what I'm trying to do.