Wolfshead Online had a pretty good article on SWTOR and MMO's in general, and the problems besieging the genre. Well, I thought it was pretty good.

Meanwhile Champions Online has been patched twice and, most tragically, some whiney twat reported one of my characters as "vulgar" and so the hilariously named "Sperminator" will have to be renamed something much less clever. Which is a damn shame, because it was the perfect name for him. 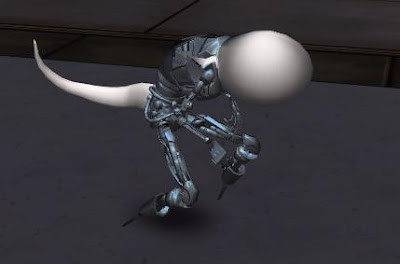 I mean come on, it's not like he's a giant chode or anything, he's a giant single-celled gamete who crash landed on earth after missing the moon, which he mistook for an egg. Who'd be offended by that, I ask you? That shit's hilarious.

Probably nobody legitimately, is the pisser, because I've only brought him out to participate in costume contests, which he's won 3 out of 4 of so far, meaning he'd only be seen by other players at said costume contests or in route to them. And probably not even in route to them, because he tunnels (See? Hilarious!) invisibly underground. Meaning, some jealous turd got mad that nobody was impressed by their 14th Lord DarknessBloodDeath costume and reported the guy who beat them with a legitimately original (and hard to make, dammit) costume out of sheer spite or some weird puritanical objection to macroscopic cells.

I mean, I still have the character, but somehow "Tadpolinator" kinda kills the joke, dunnit?

Anyway! When last we left our hero, he'd been the only witness to Defender's latest massacre of justice and was making his shell-shocked way across a bad part of town to talk with an oddly-named policeman.

I don't know this town at all, and it takes a good hour just wandering the streets before I find where I'm supposed to go. Strange, this part of town looked totally different from up at the Renaissance Center... huh. But finally, I find the police station, and try to find this Juno guy. ... Juno? Denali? Yukon Cornelius? 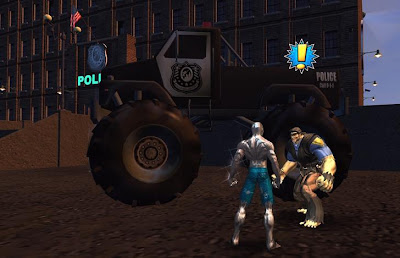 Actually, I'm a little excited to be working for this guy. He appears to weigh about seven hundred pounds and drives a monster truck painted like a squad car. His powers appear to involve having ape feet and being huge. Not quite sure why he's named after a region in Alaska, but I'm willing to go with it.

I walk up and start to chat with him, and after suggesting that we should go out and beat up kids sometime (no, seriously)

he gets right down to business and lets me know what needs doing. Apparently he's making an effort to take Westside back from the gangs that essentially run it, and he's actually going about it in a fairly logical, if oddly brutal, way. 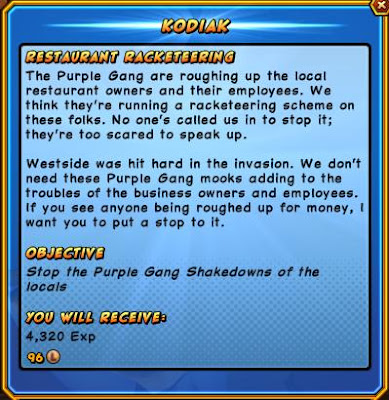 First off, patrolling the restaurant district to put a stop to shady protection deals. Done and done, that's proper superhero work if I've ever heard it. What else? 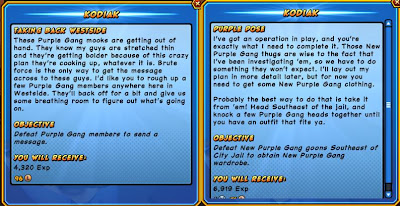 So, next, he'd like me to wander around on my own and bust a few New Purple Gang heads. That's it. Police authority to go pick fights one-sided fights with gangsters and demolish them physically to put the fear of God into their companions. I get the odd feeling that I'm on an episode of The Shield, but then I remember that I loved that show and have been meaning to get the DVDs ever since it was canceled, so I decide to go with it. Alright, step one, run around like a maniac and beat the living hell out of gangsters. But while I'm at it, he'd also like me to... steal their clothes?

I'm already picturing how this will go if another police officer sees me doing it. Hopefully "Kodiak told me to" is an answer they'll accept around here, because I don't have another good one for "why did you accost those men, beat them to death, and then strip them naked?" But then, the whole point is that the police are stretched really thin around here, so if I stick to the alleyways, hopefully none will see me. I'm off!

I make my way to the neighborhood called Little Italy where, sure enough, some intimidatingly large guys in purple suits are hard at work harassing the serving staff of several sidewalk cafes. 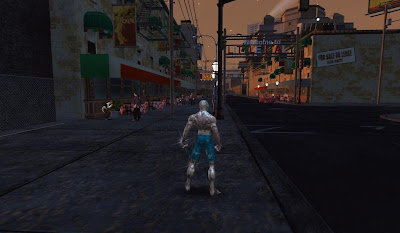 I walk up and have a word with them. 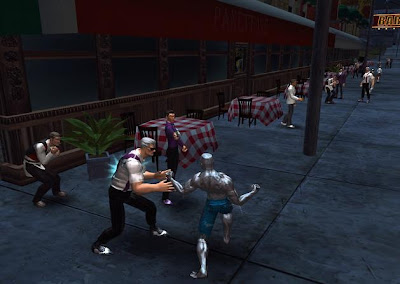 Despite the fairly horrific carnage that they'll have to mop up, most of the restaurant owners thank me profusely, and soon the entire block is clear of gangsters. I'm actually starting to feel pretty good about this! I spend the rest of the evening wandering around picking fights with anyone I see in a purple suit and leaving them broken in gutters in front of various businesses, and before too long I have a full purple outfit of my very own. I assume that this will wind up being a good thing. The crumpled clothes over my shoulder, I head back to the police station to talk with my new boss and see what the heck he wants these things for. 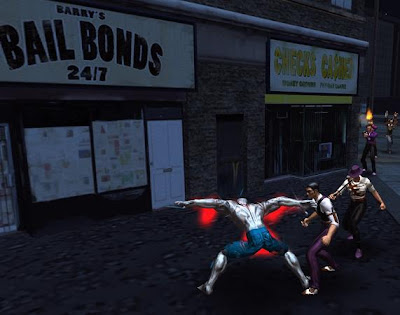 Apparently, he wants me to disguise myself as a New Purple Gang member so that I can walk into the workshop of a guy named Wayland Talos, described to me as "a deranged genius notorious for making weapons for the highest bidder" and take him down. While that's all well and good, I'm not sure that dressing in a purple suit is going to fool anybody, given that they won't recognize me as one of their own, and the small bit about my skin having the same approximate texture as a polished car bumper. But I guess worst case scenario I can always bludgeon my way in, so I put the outfit on, walk across town to the address he gives me, and fight my way into holy crap it works. 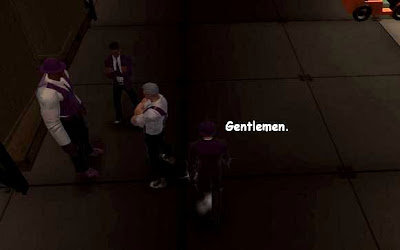 I walk right past about a dozen guys who see my purple hat and just nod and smile. I don't understand it for a second, but Kodiak, you're a genius.

Talos' workshop is in the back, and I'm pretty sure I recognize him right away. He's got a giant robot suit with some kind of power transformers on the back, though not nearly as giant as Black Talon's. I do what I always do when presented with an unfamiliar opponent of unknown power levels and punch him.

He blasts me with some sort of electrical weapon in the suit's hands, but it doesn't seem to do too much to me, and as soon as he realizes this he throws his hands up and surrenders. This, I'm actually completely unaccustomed to. I stop beating on him and listen to what he has to say. 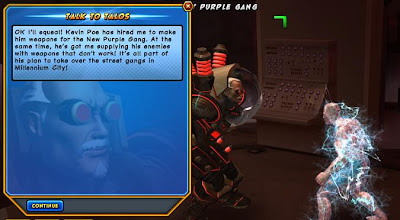 Apparently, he's working for a guy named Kevin Poe, whose evil plan is to take over all the street gangs of Millennium City by having Talos supply them with bad weapons while giving good weapons to the New Purple guys.

It somehow seems to me that this plan won't exactly help one to take over all the gangs of an entire city. I mean, I can see it giving them an advantage in a couple of fights for a little while, but how long could it actually take for word to get around that Talos isn't to be trusted as an arms dealer anymore? Like, two days? Three? I must be missing something.

Anyway, I put my "disguise" back on and go report what I've found to Kodiak. Apparently some more info has come in since we last talked ten minutes ago. 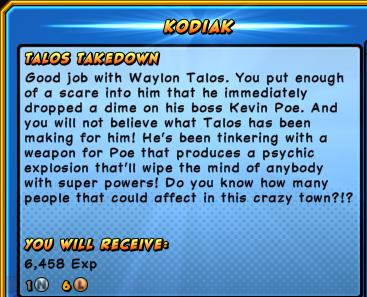 Somehow in the time it took me to walk back from the warehouse, Talos called Kodiak and told him all about he and Kevin Poe's secret plans. This is pretty surprising on it's own, but Kodiak's just getting warmed up: apparently Talos had been building some kind of giant superhero-seeking psychic bomb that would wipe the minds of myself and everybody else with superpowers throughout the city... oddly, skipping the people that would logically have no defense against such a device entirely. Three guesses who's going to have to take care of it?

I'm beginning to think that this is going to be one of those gang wars that takes more than one evening.