Am I the only one who still hears the level's song whenever I hear that phrase? No? Alright, then.

The second I slip through the vents I fall about twenty feet and land in a cavernously large room that could comfortably house approximately eight families. These, I suppose, are the Millennium City Sewers. Fortunately, there are a lot of good hiding spots where I can wait and see who comes to pick up the money drop. Even more fortunately, I can hear them coming already, no less than half a second after I've breached their sewer. What luck! 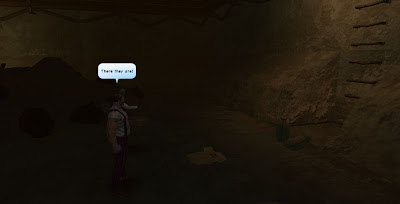 Rather than a wallet, however, a pair of comically large sacks emblazoned with giant black money signs come tumbling down from the vent above. This flower company apparently not only considers a full disguise a standard-issue uniform, but it's employees carry their money around not in wallets or even in cash boxes, but in giant sacks the size of my torso. I'm more suspicious of the flower company than ever before, but resolve to put off my investigation into their nefarious activities until after I've dealt with this extortion problem.

Moments after hefting the bags, though, they spot me, presumably because I'm highly reflective and standing upright less than a dozen feet away behind a pile of garbage half my height. The chase is on! They lead me through a quarter mile of ludicrously oversized tunnels and enormous subterranean rooms, making no effort whatsoever to disguise their path as dozens of other gang members in their assorted purple uniforms are simply standing around down here and move to stop me. I get shot approximately three hundred times, but if we're being perfectly honest I barely even notice. At this point I'm fairly certain that sustained fire from a gatling gun would feel more or less like a shower head with a massage setting used to, and these poor guys with pistols can't really injure me at all. 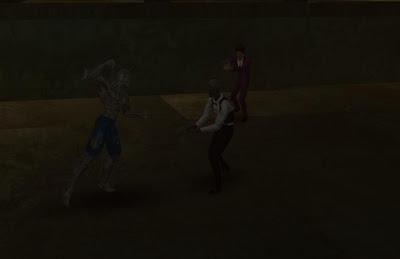 So naturally I walk up and exchange blows with them as if we're on anything approaching equal footing, causing severe and horrific tissue damage and internal bleeding if not subsequent death. Super heroic!

Eventually, I come upon a guy in a purple suit telling a little guy and Steven Seagal to close a big steel door behind him, warning that I'm coming. By name. 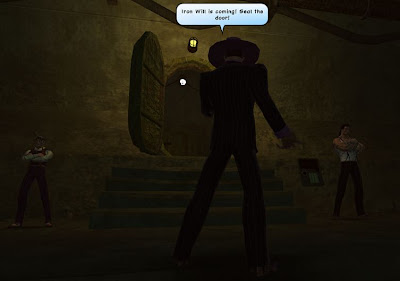 How the heck does he know my name? I shouldn't even be known in Millennium City; all I've done so far is beat up some guys in the park, and I didn't tell any of them my name. It's possible that the news mentioned what I did in the desert or Canada or something, but even then, I've completely pulverized (Rehabilitated!) every poor sod who's seen me since I came down here, so they shouldn't even have a description of me, much less my name. ... Unless... 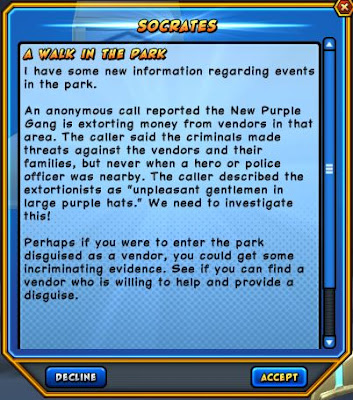 One thing at a time, I suppose. Best to play dumb for now... if I play my hand too soon, there's no telling what Socrates could do to the city and the people in it before I've managed to completely dismantle it's network. Best if I collect more evidence and get some other superheroes in on this first. The Champions are pretty useless, but if I can convince Ironclad, he might know some others we could bring in. I could talk to some of those ludicrously optimized arena heroes that handed El Fierro his ass a couple nights ago to like, net or hold or freeze or in some other way immobilize Socrates' network and then run away. If I can get in contact with Chief Surhoff he'll probably be able to help come up with a plan, and that POW from the desert would probably be able to handle any job I have for him if I can find him again. Maybe get Justiciar to monitor the radio or something and tell him that's really important. Yeah, this could work, I've just got to play play dumb for now and hope Socrates' death traps don't get significantly more effective. 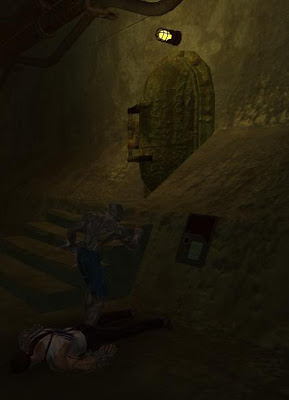 Oh, right, the purple guys. I guess I killed both of them while I was thinking about what to do with Socrates. The genius has the door code written on a piece of paper in his pocket, so I manage to bypass that particular security layer pretty quickly and find myself in a big room with a ladder up to the surface. Aw, hell. Did the guys with the bags get away? I have a feeling Defender won't be satisfied with the dozen or so dead ones scattered throughout the sewer behind me. ... In fact, I probably shouldn't tell him about them at all, come to think of it. Up the ladder I go! 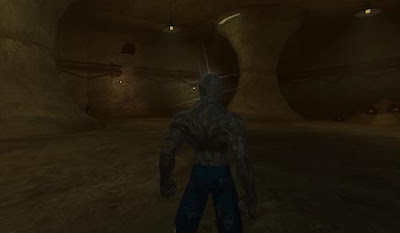 I come out in a generic shady-looking warehouse of some kind. Or at least, it looks that way at first glance, but I find that it's architecture is actually a bizarre maze of rectangular storage rooms connected seemingly at random by long hallways that seem to leave a vast majority of the floorspace either walled-off or completely filled in with brick. The place seems to be filled mostly with cardboard boxes and assorted tanks of explosives. Yikes.

Oh, and more Purple Gang thugs, I should have expected that. I decide to punch one of the exploding tanks for no other reason than because it seems like something a superhero would do, and voila! The thugs go down from the intense heat and pressure of the explosion, and I remain completely unscathed but for a new layer of burn on my jean-rags, which are becoming sort of like a medal sash for the various horrible deaths I've shrugged off. Onward! 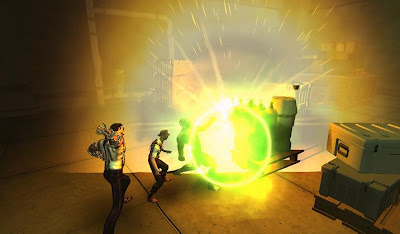 Finally, I make it to the security console. Which, I guess, was a goal? That I didn't know about? I can use it to shut down their security system, though, which sounds worth doing. It's mere presence sort of alarms me, as it means they probably have video of me casually strutting through the sewer and whistling while breaking the limbs and organs of their friends, but at least now they won't have any MORE incriminating footage of me. Little victories are still victories. 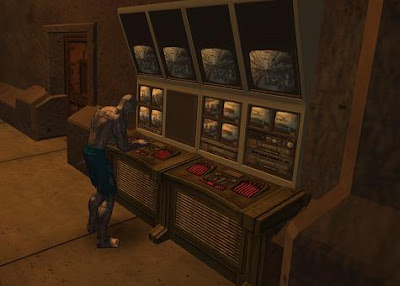 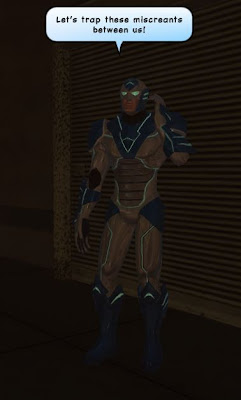 I'm just pondering whether or not they'd be able to sue for excessive force when every shot should show them discharging deadly weapons at me first, and whether the fact that said deadly weapons are entirely nonlethal in my case would hurt an aggravated assault in self-defense plea, when Defender hails me over whatever weird ear implant thing I have.

Apparently this whole time I've been wading through liquid feces and being shot at repeatedly, Defender's just been chilling by the front door waiting for somebody to unlock it. Now that I've done that for him, he's actually willing to help me take care of this gang problem of his and not mine. Hooray!

Well, at least he's looking cooler than the last time I teamed up with him, somehow. Armor upgrade, I guess? Maybe got an anti eat-shit-in-the-first-five-seconds-of-a-fight-and-not-get-back-up device? We'll see, I suppose. I prepare to do absolutely everything by myself and continue forward.

The random goons I run into in the hallways seem to be getting more varied as I make my way through the bizarrely mazelike warehouse. In addition to a few more Purple Gang members, I run into some more bikers like the ones I beat up in the park, and then at one point a colorful squad of 80's movie ninjas. What the heck is up with this warehouse? 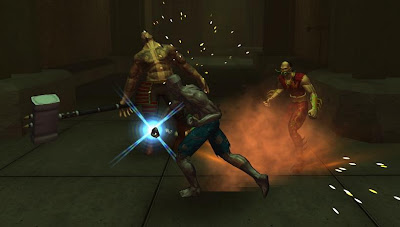 Finally, I come out of the twisting hallways into a giant storage room that seems to have been rigged up like some kind of council chamber. Some tables are arranged in a circle, each one of which has some shady-looking guys in oddly thematic costumes sitting at it. I see purple gang members, bikers, what look like punk rockers but might also be clowns, and mimes. They're all sitting listening to a speech from a man in a dress who seems to be making fun of Chinese people with a clearly caricaturish accent and an extended joke about how Asians have trouble with L's.

It takes me a few minutes to realize that this isn't some bizarre back-alley comedy show but a legitimate criminal gathering. The guy making fun of Asians is also talking about uniting the Westside gangs in the wake of the Qularr attack that's significantly weakened the Millennium City Police Department's ability to effectively control crime in the area. By the looks of it, he's got at least five oddly thematic gangs at least partially convinced. I've got to warn Surhoff!

The racist comedian seems to finally notice me and panics for some reason. With a snap of his fingers, he disappears in a puff of smoke along with several of the people sitting at the centers of the tables, presumably the leaders of the various gangs. From across the room, I can see Defender charging into the crowd, the members of which have already turned on each other and are descending into a chaotic brawl. Time to go to work, I guess! 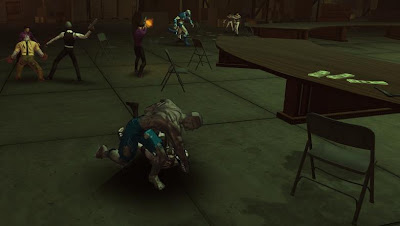 My main problem at this point is how to gently take these guys down without accidentally crippling any of them. I mean, it's all well and good out on my own when they're actively trying to kill me, but it seems like the objective here would be making arrests, and the leader of the Champions is staring right at me. I'll have to be really careful to use the bare minimum amount of force necessary to- 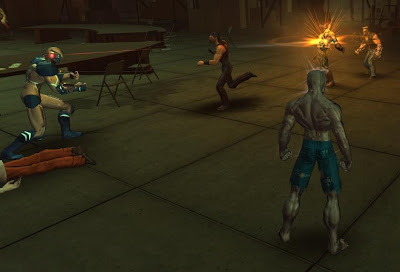 WAS THAT A GODDAMN MISSILE?!?

Defender definitely just shot an unarmed man in the chest with a missile from a launcher that just popped out of his shoulder.

He doesn't seem to hear me, and continues gleefully cutting down the fist and knife wielding gangsters with some kind of cutting laser and a minigun. I kind of just stand there. I don't really know what I'm seeing.

Most of his friends dead, one of the brightly colored ninja guys flees, noticing me and running towards me with pleading eyes, for protection, for a hostage, for answers, I don't know. He doesn't reach me, though. Defender unloads several dozen rounds from a shoulder-based minigun into the small of the fleeing, unarmed man's back, so close to me that I'm spattered with blood. 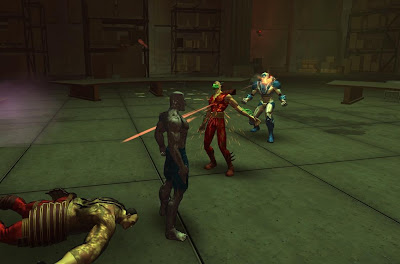 Defender struts over to me and nonchalantly discusses our next move, not even addressing the dozen people he's just murdered, some in cold blood. 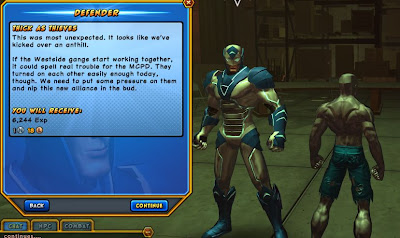 He tells me to meet up with someone named Kodiak in Westside. Kodiak, like, the town in Alaska, I guess? I'm not really sure. I can't think. I step over a dead man, unsuccessfully trying to avoid touching the widening puddle of blood underneath him. Air, I need air. I stumble to the door and throw it open. 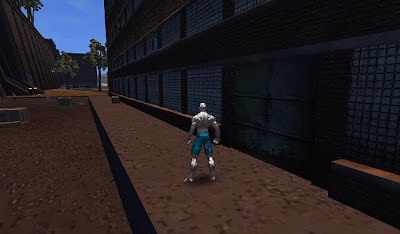 I'm in a warehouse district in a bad part of town, the clear blue sky a little pale with haze. Away to the left is the giant wall that keeps the Renaissance Center, home of the rich and the super-powerful, separated from the living spaces of the poor. I take several deep breaths, trying to clear the coppery smell of blood from my palate. Right. Kodiak. Nip gang alliance in the bud. Save the MCPD.

Let's see what this Alaskan person's all about.